Going with the Flow

November 12, 2013• Physics 6, s143
Locally heating blood with ultrasound lets researchers track its motion with laser probes even when the fluid is moving slowly.
×

Measuring local blood flow inside living creatures provides insight into both normal functions and diseases. Ultrasound can probe deep within tissues by using the Doppler shift of the sound waves’ frequency to detect the motion of blood cells. But this effect is unmeasurable for blood moving slower than about ten millimeters per second. In Physical Review Letters, Lidai Wang and his colleagues at Washington University, Missouri, demonstrate that ultrasonic waves can instead be used to heat a small volume of blood, thereby “tagging” it. The motion of this tagged blood is then tracked by a light-based technique. In a test setup, they measured speeds as low as a quarter of a millimeter per second.

To track the motion of the tagged blood, the researchers exploited the photoacoustic effect, in which absorption of an infrared light pulse locally expands a material, generating sound waves. Because the amplitude of these sound waves varies with the starting temperature of the blood, laser pulses repeated ten times a second showed directly how the ultrasonically heated region moved. Comparing subsequent “snapshots” of the sound waves, which were captured with an array of detectors, let the team follow the flow in a -mm tube of cow’s blood, including its faster speed at the center of the tube.

Unlike ultrasound, the near-infrared light interacts more strongly with blood than with tissue, but can’t be focused deeper than a millimeter. But because their technique gets its resolution from the sound imaging, the researchers were able to measure blood speeds in their test sample even when the light had to first pass through a -mm-thick piece of chicken breast tissue. – Don Monroe 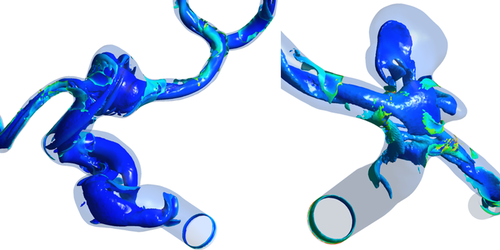 Patient-specific modeling could help clinicians determine whether an individual’s brain aneurysm is at risk of bursting. Read More »

Optical Sensor for a Pancreas-on-a-Chip

An optical sensor consisting of gold nanorods can provide real-time data on insulin production in an on-chip device mimicking the pancreas. Read More »