Shaking Open a Gap in Graphene

Graphene is an amazing material that has a lot going for it. But one thing it lacks is a gap in its electronic band structure that would allow it to be used as a semiconductor. Researchers can artificially introduce a gap, but often the energy separation is fixed. A new theoretical study in Physical Review Letters demonstrates how a special phonon excitation of graphene could open up a tunable gap in the material.

Graphene’s conductivity rivals that of most metals, but it is actually a zero-gap semiconductor, in which the conduction and valence bands meet at a single point. The missing gap could be advantageous for using graphene in solar cells, but it limits the use of the material in transistors. Doping or cutting graphene into nanoribbons can create a gap but may also, unfortunately, reduce the conductivity. Other techniques, like placing graphene sheets on a substrate, do not allow tuning of the gap.

Thomas Iadecola of Boston University, Massachusetts, and his colleagues have formulated a gap-opening mechanism that involves driving the carbon atoms away from their equilibrium positions. To do this, they imagine a phonon excitation (coming from, for example, inert atoms scattering off the material) that deforms the bond lengths in the lattice in a rotating pattern around the hexagonal structure. When they calculate the effect on the electrons, they find that the phonon-excited system is equivalent to an equilibrium state in which graphene has a band gap, whose width depends on the phonon amplitude. As a representative case, phonons that deform the bond lengths by should produce a band gap of electron volts. – Michael Schirber

Graphene Reveals Its Strange Side 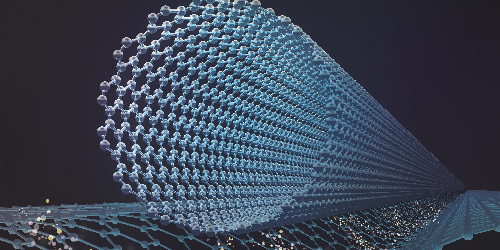 A Graphene Waveguide For Electrons