June 4, 2015
Theoretical calculations show that an electric-field-induced strain, called electrostriction, can be increased (or decreased) by forming composite materials.

All dielectric materials deform in an electric field because of forces on induced dipoles. Typically, this “electrostriction” is quite small, but theoretical work has now shown that combining different dielectrics together in a metamaterial can boost (or reduce) the amount of deformation. The ability to engineer electrostriction could allow tuning of optical-acoustic interactions that are important in optical fibers and for processing microwave-frequency signals.

When an electric field is applied to a dielectric, it induces tiny dipoles inside the crystal. The electric field will also try to rotate the dipoles into alignment, causing a slight stretching of the crystal in the field direction. Because electrostriction depends on the field to both induce and rotate the dipoles, it is proportional to the square of the field strength. A similar (but stronger and linear) mechanical response occurs in piezoelectric materials.

Despite its relative weakness, electrostriction is the driving mechanism behind stimulated Brillouin scattering (SBS), which is an interaction between light and sound waves that occurs in optical waveguides. SBS is often a nuisance, but researchers have harnessed it to produce lasers and fiber-based signal processors. Mike Smith of the optics consortium CUDOS at the University of Sydney, Australia, and his colleagues demonstrate that SBS and related effects might be controlled by combining materials with different electrostrictive properties. They formulated a theoretical expression for the electrostriction in a metamaterial containing an array of nanospheres. The calculations show that embedding silver spheres in silica, for example, gives times higher electrostrictive strain than pure silica, while other combinations reduce the electrostriction to near zero values. Surprisingly, the authors also found that a metamaterial can be electrostrictive even if none of the constituent materials exhibit electrostriction. 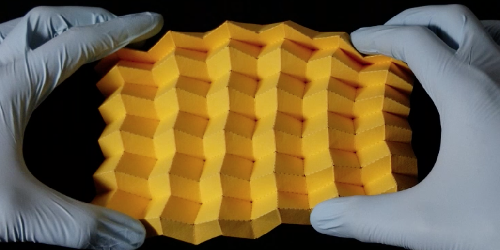 A folding pattern produces a metamaterial with properties that can be tuned over a wide range. Read More » 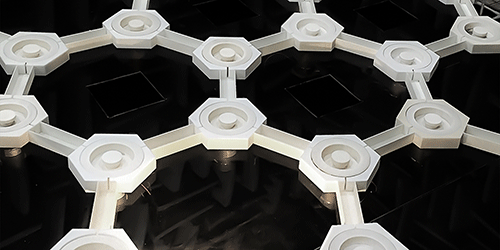 An array of air channels behaves as an “acoustic Chern insulator” in which sound waves travel only around the edges and only in one direction. Read More » 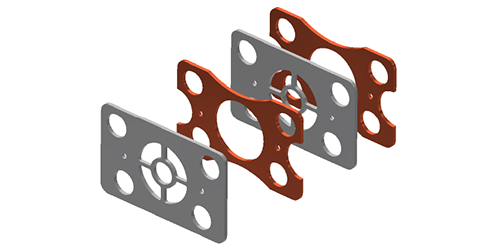 Viewpoint: A Metamaterial for Next Generation Particle Accelerators