April 20, 2016
A combination of a quantum dot and superconducting leads works as an electron turnstile, letting only one electron pass at a time through a single level in the dot.

A new design for an electron “turnstile” uses a quantum dot sandwiched between superconductors to shuffle one electron through at a time. The advantage of this device over previous turnstiles is that only one energy level in the dot is available for electrons to pass. This restricted access prevents electrons from cutting in line and ensures that the electrons that do flow have a single energy, making the device ideal for quantum metrology applications, such as defining the ampere.

The basic electron turnstile uses a small conducting island connected through tunnel junctions to entrance and exit leads. Tunneling is controlled by a periodically varying voltage that works like a revolving door, letting electrons first tunnel into the island and then, later, out. In principle, only one electron passes at a time because the charge of the electron on the island repels others from following. In practice, however, extra electrons can sneak through.

The new turnstile made by David van Zanten from the University of Grenoble, France, and his collaborators is based on a currently popular design in which a metal island sits between superconducting leads. Superconductors have gaps in their electron energy distribution that help limit the tunneling, but the metal has a continuum of energy levels that lets unwanted electrons through. To prevent this, the authors essentially shrunk the metal island to a quantum dot, which has discrete energy levels. The spacing of these levels is large enough that electrons can only occupy the dot’s ground level. The team showed that this single-level access produces single-electron flow (at one energy) with less than 1% error from electron interlopers.

Light Tuner Slows Down to Shift

Viewpoint: Counting the Quanta of Sound

Two teams demonstrate that they can count the number of quantized vibrations, or phonons, in cold mechanical oscillators by measuring the energy in the vibrations. Read More » 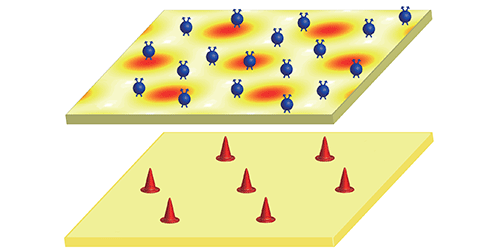 Synopsis: Tickled by a Wigner Crystal

The lattice symmetry of a quantum Wigner crystal is deduced from its effect on quantized states in a nearby sheet of electrons. Read More » 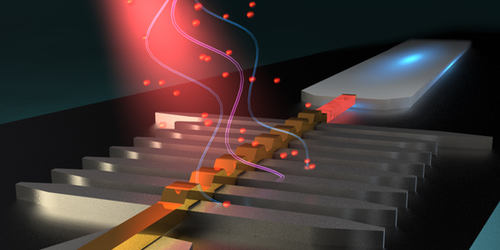 Focus: Detecting Photons With a Thermometer

A new technique detects as few as 200 microwave photons at a time by the heat they supply to an electrical circuit. Read More »