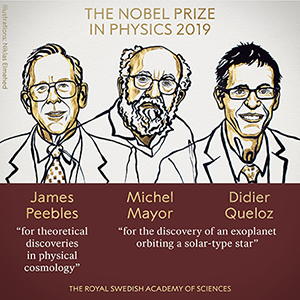 James Peebles, Michel Mayor, and Didier Queloz have been awarded this year’s Nobel Prize in Physics “for contributions to our understanding of the evolution of the universe and Earth’s place in the cosmos.” Half of the prize goes to Peebles, who has been instrumental in developing the theory of how our Universe went from a hot dense soup of particles to a rich network of galaxies. Mayor and Queloz share the other half of the prize for their 1995 discovery of the first planet orbiting a Sun-like star. Find out more in the Physics article, “Nobel Prize—Tackling Cosmic Questions.” See also this APS News update.