Celebrating the 2015 International Year of Light

Physicists have made great advances in the science and technology of light over the past century. Physics revisits six specific advances reported in the APS journals that are of special interest. 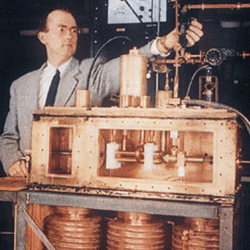 Birth of the Laser Age

Lasers generate narrow beams of visible light in DVD players, grocery scanners, and surgery devices, but the invention began with longer-wavelength radiation called microwaves. Charles Townes and his colleagues at Columbia University in New York demonstrated in a pair of papers in the mid-1950s that they could produce a new and more useful form of amplified microwaves.

The Columbia team's "MASER" (microwave amplification by stimulated emission of radiation) involved a beam of excited ammonia molecules that could emit the microwaves spontaneously or when "stimulated" by microwaves of the same wavelength. When the team sent this molecular beam through a metal box of the correct dimensions, the emitted microwaves were amplified, the way an organ pipe or a guitar string of a certain length resonates and emits a specific pitch. Radiation from earlier-arriving molecules stimulated emission from later-arriving molecules, generating "self-sustained" microwave radiation with a narrow range of wavelengths. These microwaves were ideal for making more precise measurements of the energy levels in molecules and for providing an extremely reliable clock for frequency measurements. Townes shared the 1964 Nobel Prize in physics for his work on masers and lasers.

See original Physics article: Invention of the Maser and Laser 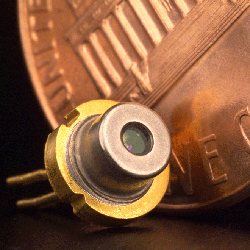 Lasers for the Rest of Us

The 1962 invention of the diode laser allowed lasers to go from expensive, specialized devices to cheap and ubiquitous components of consumer appliances. A diode is a chunk of semiconductor material that allows electric current to pass in only one direction, and in 1962 researchers reported that diodes made from gallium arsenide emit large amounts of infrared light. The emission comes from the collision and merging of the two types of charge carriers found in semiconductors—negative electrons and positive holes (vacancies that correspond to missing electrons). To make a resonant "box" for this light, equivalent to the box used in the maser, Robert Hall and his colleagues at the General Electric Research Laboratory in Schenectady, New York, made a small crystal of gallium arsenide and polished two opposite faces. This diode produced an infrared beam, but later improvements led to the standard red light we see in use today. 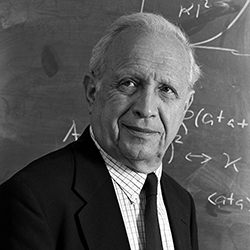 The Quantum Side of Light

Since the 19th century, light was known to be a wave of electric and magnetic fields. In the early 20th century, the physics revolution known as quantum mechanics included the alternative description of light as a collection of particles called photons. But Roy Glauber of Harvard University realized that with the invention of the laser and the detectors capable of sensing a single photon, a more complete quantum theory of light was needed. His theory, published in 1963, explained that photons are not entirely independent objects and that detecting a photon from a light beam affects the probability of detecting another photon. His theory marked the birth of the field of quantum optics, which led to a wide range of advances, such as a type of optics-based cryptography that has already been used for some bank transactions. Glauber shared the 2005 Nobel Prize in physics for his work. 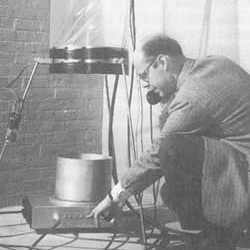 How Heavy is Light?

Drop a stone from a bridge, and it will accelerate, but shine a laser beam down, and its propagation speed is fixed. Still, Einstein's relativity theory predicts that the light beam will gain energy as it drops, not by speeding up, but by slightly increasing in frequency, which is the same as a tiny shift in color. The shift was too small to detect until 1959, when physicists discovered an extremely precise technique for measuring the frequency of short-wavelength light called gamma rays. Robert Pound and Glen Rebka of Harvard University set up a gamma ray source at the top of a tower in a Harvard physics building and a detector in the basement, 74 feet below. They detected a frequency shift of just a few parts in 1015 and verified the so-called gravitational redshift predicted by Einstein to within ten percent of the expected value. 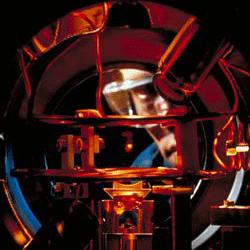 In the 1970s and 80s, physicists learned to use lasers to slow down and trap atoms in order to study them in more detail. Three important developments in atom cooling techniques led to a shared Nobel prize in 1997. First Steven Chu, then at Bell Labs in New Jersey, and his colleagues, developed "optical molasses." In this technique, laser beams hit a cloud of atoms from six different directions. The lasers are tuned to frequencies of light that the atoms can absorb only when they are moving toward a beam. Absorbing the light slows an atom down, and the process can rapidly cool a cloud of sodium atoms to less than a thousandth of a degree above absolute zero. Three years later, two other teams came up with additional tricks to "thicken" the molasses and cool it down to two millionths of a degree above absolute zero. These techniques for slowing and cooling atoms led to dramatic improvements in extremely precise clocks based on atoms and to the creation of a new ultracold state of matter called a Bose-Einstein condensate (see Physics article The Coolest Atoms). 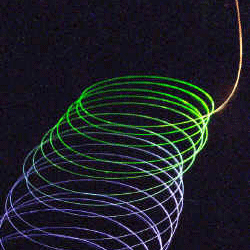 Precise measurements of the frequencies of light waves emitted by atoms have helped physicists make great progress in understanding the quantum world and the nature of atoms. But a truly high-precision measurement of the frequency of light has traditionally been a huge project, available at only a handful of labs. The problem is that there's a large gap between the precisely-known frequency of an atomic clock (109 cycles per second, or Hz) and that of the visible light emitted by atoms (around 1015 Hz).

In 2000, a team in Colorado reported a much simpler technique. John Hall of the National Institute of Standards and Technology (NIST) and the University of Colorado in Boulder and his colleagues used a laser that produces a short pulse a hundred million times per second in a highly controllable way, which is synchronized with an atomic clock. After being sent through an optical fiber, the beam contains the equivalent of millions of laser beams with precisely-known frequencies that are equally spaced, like teeth on a comb. This comb is like a ruler, and the team showed they could use it to precisely measure another laser’s frequency by finding the closest “tooth” on the comb. Hall won a portion of the 2005 Nobel Prize in physics for this work.