Proximity to understanding the cuprates

March 15, 2010• Physics 3, 23
Scanning tunneling microscopy experiments in a high-temperature superconductor probe the temperature evolution of local electronic states, revealing that regions in the sample exhibiting weak superconductivity can persist to elevated temperatures if they are surrounded by regions of strong superconductivity.
×

Modern materials engineering is increasingly dominated by the nanoscale, where surface area trumps volume, so it stands to reason that interfaces between materials are at the forefront for the discovery of new properties. The last few years have seen the discovery of new interface states such as a metal [1] or superconductor [2] between two insulators, magnetism between two nonmagnetic materials [3], and a topologically protected spin current between a semiconductor and vacuum [4]. One type of interface that has been studied for 50 years is still yielding new surprises: the superconductor-metal interface. Writing in Physical Review Letters [5], Colin Parker, Aakash Pushp, Abhay Pasupathy, Kenjiro Gomes, Jinsheng Wen, Zhijun Xu, Shimpei Ono, Genda Gu, and Ali Yazdani, in a collaboration between Princeton University and Brookhaven National Laboratory, both in the US, and the Central Research Institute of Electric Power Industry in Japan, use scanning tunneling microscopy to shed new light on this familiar old interface, resolving it for the first time with nanoscale precision in a cuprate high- superconductor. This precise mapping may bring new insight to a most contentious debate in cuprate superconductivity.

In 1960, Hans Meissner published the results of a many year study of dozens of junctions between various combinations of superconductors and metals [6]. He concluded: “It is now believed that just as superconducting electrons can drift into an adjoining normal conducting layer and make it superconducting, normal electrons can drift into an adjoining superconducting layer and prevent superconductivity.” This careful experimental work laid the groundwork for de Gennes’ 1964 theory of the so-called “proximity effect” [7], sketched in Fig. 1 (a). The question is, how do the superconducting pair potential and pairing probability amplitude vary as a function of temperature and distance from the interface? The answer depends on material specific parameters, such as the coherence length of the superconductor, the roughness of the interface, and the mean free path. Importantly, the effect depends on the native electron-electron interaction in each material. Therefore, detailed measurements of length scales and transition temperatures near an interface may be used to discover any unrealized pairing interaction in the normal state.

The proximity effect has been primarily studied with bulk transport experiments, particularly in superconductor/normal/superconductor (SNS) sandwich junctions, where one can measure how much supercurrent flows through a normal layer in proximity to a superconductor on both sides. In 2004 [8], a “giant proximity effect” in cuprate high- superconductors was convincingly demonstrated using atomically perfect junctions sandwiching ( ) between two layers of ( ), as shown in Fig. 1 (b). At , a supercurrent was found to flow across a barrier times thicker than both the superconducting coherence length , and the normal mean free path . One proposed explanation is resonant tunneling through preformed pairs in the layer, highlighting the proximity effect as a probe of the pairing interaction in the normal state.

It is on this subject of pairing potential that the new work of Parker et al. may have the most impact. When electrons form superconducting pairs with pairing energy per electron, an energy gap opens in the electronic density of states (DOS). The local DOS can be measured by a scanning tunneling microscope (STM); it is proportional to the differential conductance ( ) between the sample and an atomically sharp tip that is scanned with sub-Ångstrom precision across the surface. The approximate local can be read off simply as the energy at which the electronic states pile up maximally at the gap edge. The catch is that a gap persists even in regions of the cuprate phase diagram where resistivity is no longer zero; this anomalous gap is called the “pseudogap.” The pseudogap is most notorious in underdoped cuprates, where the carrier concentration is too low for optimal superconductivity. The role of the pseudogap is perhaps the most contentiously debated issue in the contentious field of high- superconductivity. The pseudogap is thought to signify either preformed pairs or an entirely distinct electronic ordered state.

In the “preformed pairs” picture, the strongest pairing occurs at low doping, and decreases gradually as doping increases. Superconductivity requires both that the electrons pair, and that the pairs condense into a phase coherent state. The zero resistance is set roughly by the lower of these two energy scales [9], as shown in Fig. 2 (a). In this picture, the purported large energy scale of pairing in the underdoped cuprates is reflected in the pseudogap, but does not lead to zero resistance because the superfluid density is too low for phase coherence. This picture has led to proposals that could be raised in cuprates if only the phase coherence could be increased on the underdoped side—in particular, by proximity of a superconductor with strong pairing to one with phase coherence. Recently, Berg et al. proposed that even an adjacent metal could provide the necessary phase coherence [10].

Following this line of reasoning, Yuli et al. were able to increase of underdoped by coupling to metallic [11], as shown in Fig. 1 (c). Gozar et al. took this a step further, as shown in Fig. 1 (d), achieving superconductivity at by coupling to metallic , neither of which have greater than in isolation [12,13]. These results seem very exciting for exploiting the apparently large pairing scale of underdoped cuprates to arrive at similarly large . However, in the layered geometry, it has been difficult to “see” exactly what is going on at the buried interface. One would like to measure pairing strength and directly with spatial resolution.

In their Letter, Parker et al. provide a first experimental description of the proximity effect in a cuprate superconductor in a lateral geometry. This work extends a series of papers describing a comprehensive microscopic dataset spanning a dozen doping levels of (BSCCO) ranging from (underdoped), to (overdoped) [14,15].

Parker et al. focus on a single overdoped sample, where they map the density of states in the same atomically registered field of view at a range of temperatures from through . They track the inhomogeneous temperature evolution of , and define the local “pairing temperature” as the temperature at which disappears. Earlier work had shown an average relationship between local and [14]. This work performs a more detailed analysis that demonstrates that the – relation is not purely local. depends not only on the local pairing potential , but also on the nearby pairing potential. is elevated above the expected local value in places where neighboring regions have stronger pair potential . In other words, it appears that superconductivity may be persisting above the local in regions that would otherwise be normal, because of their proximity to regions of stronger pairing potential that are still superconducting at that temperature. The authors suggest that this effect may be useful to make higher superconductors by careful control of dopant distribution; the implication is that by locally coupling regions of higher pairing potential with regions of higher coherence, bulk may be raised.

However, some subtleties remain. First, there appears to be persistent confusion in the cuprate community as to whether a locally measured gap actually indicates local superconductivity, or even pairing. As is proven in bulk by the pseudogap on the underdoped side, the existence of a gap does not necessarily indicate a zero resistance state. Second, the authors’ previous work [15] casts some doubt on whether there exist any regions of higher pair potential than in “optimally” doped BSCCO, where is already maximized. They show that the pairing potential saturates and becomes homogeneous in underdoped BSCCO, as shown in Fig. 2 (b), and that the larger gaps apparent in underdoped tunneling spectra are occurring in a different part of space, do not follow the expected ( -wave) form, and are therefore not likely superconducting pairing gaps. The first STM evidence of this “2-gap” or “distinct electronic ordered state” picture was given by Boyer et al. [16], and is supported by many other experiments. There is an apparent dichotomy, between evidence that can be raised above its optimal value by coupling underdoped to overdoped cuprates in the lanthanum family, and evidence that the -wave pairing is saturated across all dopings less than optimal in the bismuth family.

Lateral proximity effect mappings like those of Parker et al. could clarify the interplay between pairing potential and tendency to develop phase coherence, especially with the remarkable ability to track atomically resolved locations across such a wide range of temperature. Lateral dopant distribution has been hard to control in BSCCO, but tremendous progress has been made in staged compounds of [17]. Of course, the battle lines are just being drawn in the new pnictide superconductors, where even the existence of the pseudogap state is still open to debate [18], let alone whether it may symbolize fluctuating superconductivity that could eventually give rise to higher .

Jenny Hoffman is a Professor at Harvard and at the University of British Columbia. She earned her Ph.D. in physics from the University of California, Berkeley, in 2003, and was a postdoctoral fellow at Stanford before joining the Harvard faculty in 2005. Dr. Hoffman’s experimental research is motivated by the idea that layer-by-layer growth and nanoscale imaging of materials can uncover new physics and applications that are inaccessible via bulk synthesis and probes. Her laboratory combines molecular beam epitaxy and scanning probe microscopy to image and manipulate the electronic and magnetic properties of quantum materials. Dr. Hoffman has been named a 2006 PECASE Fellow, a 2008 NSF Career Fellow, a 2010 Sloan Research Fellow, a 2013 Radcliffe Fellow, a 2014 Moore Foundation Experimental Investigator, and a 2015 Canada Excellence Research Chair. She is grateful to work with outstanding students like Dennis.

Nickelates Have Their Own Superconducting Style

Nickel oxides appear to have a fundamentally different superconductivity from that of copper oxides, according to new calculations. Read More »

Phonons Are Key in Strained Superconductors 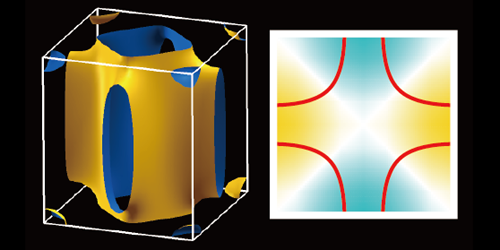