Notes from the Editors

An innovative idea, a result that stirs the community, the potential to impact everyday life, or quite simply, a great story. For us, these were the factors that made these research results covered by Physics in 2014 stand out.

Wishing everyone a bright 2015.

Even the most celebrated experimental searches for dark matter usually yield null results. This year, an actual signal showed up in the x-ray spectra of distant galaxies thought to harbor a large mass of dark matter. Two satellite telescopes, one run by ESA, the other by NASA, observed an unexplained x-ray line at 3.5 keV (see Viewpoint: X-Ray Line May Have Dark Matter Origin) emerging from the Andromeda Galaxy and a cluster of galaxies in the Perseus constellation. The researchers argue that the emission is consistent with that expected from sterile neutrinos (a candidate dark matter particle) emitting x rays as they decay into photons and conventional neutrinos. Better measurements of the shape of the x-ray line will be needed to test the dark matter interpretation.

Scientists at Lawrence Livermore’s National Ignition Facility had good news to report in their attempt to drive an energy-producing fusion reaction with powerful lasers. A subtle change in the way they preheated the fuel pellet allowed them to produce the highest number of fusion reactions ever obtained from a laser-driven scheme (see Viewpoint: Encouraging Signs on the Path to Fusion). The result was a promising milestone on the path to making a fusion energy source that generates more energy than it takes to run it, though experts agree this goal is still many years away.

See also: Researchers at Sandia National Labs reported progress on a complementary approach to fusion, which uses electrical currents, instead of lasers, to compress fusion pellets (see Viewpoint: Magnetic Fields Lock in the Heat for Fusion).

The report by the BICEP2 collaboration of a signal that could have been produced by gravitational waves from the big bang was perhaps the biggest physics story of 2014 (see Viewpoint: Peering Back to the Beginning of Time and Focus: Theorists Weigh in on BICEP2). The observed signal—a “ -mode” polarization pattern in the cosmic microwave background—was thought to represent the first direct observation of gravitational waves, the proof of the quantum nature of gravity, as well as a new probe of the earliest moments in the life of the Universe. But later scrutiny suggested that a more mundane source, galactic dust, could cause part, or all, of the signal. A joint analysis of the dust effects by BICEP2 and the Planck-satellite collaboration is expected in early 2015 and might bring closure to the debate.

The semiconductor industry spent decades trying to rid silicon of impurities. But it turns out a silicon defect in diamond is worth keeping around. Several experiments showed that silicon vacancy (SiV) centers, in which a silicon atom sits between two empty carbon sites, have qualities that make them promising for quantum information applications. A collaboration led by researchers at Ulm University in Germany and Harvard University showed that two nearby SiV centers can be used to generate single photons with identical color, a key step towards preparing the entangled states of light that are the basis of quantum computing and cryptography (see Viewpoint: Diamond and Silicon Get Entangled). The same group, and an independent team at Cambridge University in the UK, also demonstrated that the spin on the SiV center can be prepared in a coherent quantum state, a minimum requirement for using the defects to encode quantum information (see Viewpoint: Diamond Spins Shining Bright).

Ball lightning—a potentially dangerous atmospheric phenomenon—consists of a luminous sphere that appears for up to tens of seconds before disappearing without a trace. Accounts go back centuries, but it is so rare that scientists still don’t know what it is. In January, researchers from Northwest Normal University in Lanzhou, China, reported the first observation of the spectrum of ball lightning (see Focus: First Spectrum of Ball Lightning), acquired serendipitously when they were recording data on ordinary lightning. The spectrum supports the hypothesis that ball lightning results from an ordinary cloud-to-ground strike that vaporizes silicate minerals in the soil, generating pure silicon that glows as it reacts with oxygen.

A computer based on photons could run much faster than conventional computers relying on currents of electrons. However, since photons, unlike electrons, do not strongly interact, it is hard to build all-optical logic components like transistors. This year saw two groups, one at the Max Planck Institute of Quantum Optics and the other at University of Stuttgart, both in Germany, independently demonstrate single-photon optical transistors (see Viewpoint: Optical Transistor Flips On with One Photon). In their schemes, a gate light pulse containing only one photon controls the transmission of another light pulse passing through an ultracold gas. These demonstrations were the first to have a transistor gain well above 1, meaning that one photon controls the destiny of many more—a critical feature for applications.

Statistical physics may not be the first thing that comes to mind when thinking of medical diagnostic techniques. But a researcher at the University of the Basque Country, Spain, demonstrated that measurements of the “entropy” of immune cell distributions could reliably diagnose one of the most common leukemia forms, acute myeloid leukemia (AML) (see Viewpoint: Diagnosing Leukemia Through Entropy). The method, which compares the statistical properties of a patient’s cells with those of AML cells, was developed in response to a community-based challenge calling for new diagnostic tools based on the analysis of large ensembles of single-cell data. With a perfect success rate, the technique ranked top in the challenge, and is now being extended to distinguish among different stages and subtypes of AML and to tackle other diseases, from HIV to multiple sclerosis.

Why Don’t We Remember the Future?

Thermodynamics says that time moves in the direction that increases entropy, but the laws of classical physics are completely reversible in time. So why does our psychological perception of time move in the same direction as the thermodynamic arrow of time? According to scientists at Caltech and the University of Southern California in Los Angeles, there is a fundamental reason we can’t “remember the future.” Using a thought experiment based on a simple memory device—a turnstile that records the passage of gas molecules between two chambers—they found that a memory of the future cannot exist (see Focus: Why We Can’t Remember the Future). The tiniest fluctuations in present events can have huge effects on future events, and it turns out that this sensitivity makes it impossible to make a physical device that records the future by extrapolation from the present.

See also: Theorists showed that even a simple system of particles interacting through Newtonian gravity—a completely time-symmetric situation—produces a natural direction for time (see Viewpoint: Arrow of Time Emerges in a Gravitational System). 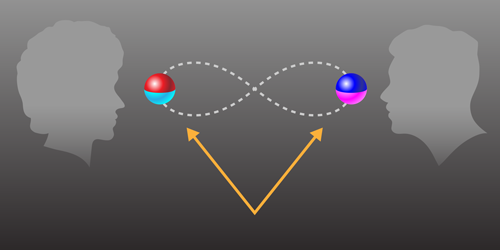 Quantum Mechanics Must Be Complex

Evaluating Models of the Muonium-to-Antimuonium Transition