Christine Silberhorn is a professor at the University of Paderborn, where she is leading a research group in the area of integrated quantum optics. Her interests cover novel optical technologies based on quantum optics, and light-based quantum systems for use in quantum communication and quantum information processing. She has contributed to the development of engineered quantum light sources using integrated optics and ultrafast pulsed lasers, the implementation of multichannel quantum networks for photon counting and quantum simulations, and the realization of quantum communication systems with bright light. She received her doctorate from the University of Erlangen in 2003, and worked as a postdoc at the University of Oxford from 2003 to 2004. From 2005 to 2010 she was a Max Planck Research Group Leader in Erlangen. (Photo by DFG Ausserhofer.) 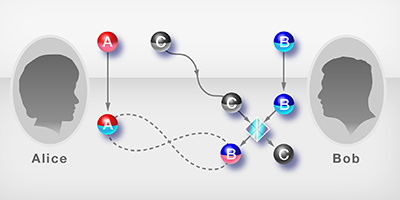 Sharing Entanglement without Sending It

Three new experiments demonstrate how entanglement can be shared between distant parties without the need of an entangled carrier. Read More »