Eric Bertin studied theoretical statistical physics at the CEA in Saclay, and received his Ph.D. in 2003. After a postdoc at the University of Geneva, he was appointed as a CNRS Research Associate in the Physics Department of the Ecole Normale Supérieure de Lyon. In 2013, he moved to LIPHY, an interdisciplinary physics laboratory of the CNRS and Joseph Fourier University in Grenoble. His current research focuses on the statistical characterization of non-equilibrium physical systems and on applications of statistical physics concepts and methods to other fields, such as statistical signal processing and the modeling of social systems. 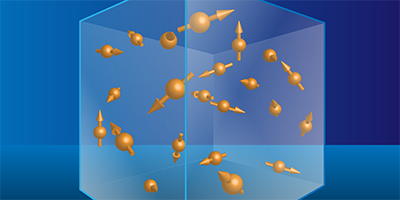 An Equation of State for Active Matter

An equation of state for a gas of self-propelled spheres is a step towards a thermodynamic description of “active” matter, such as bird flocks and tissue. Read More »