Eric Swanson is an associate professor at the University of Pittsburgh. He obtained his Ph.D. from the University of Toronto in 1991 and subsequently spent three years at MIT and six years in North Carolina before moving to Pittsburgh. He has published more than papers on theoretical hadronic physics, condensed matter physics, and biophysics. Swanson was named an APS Fellow for his work on particles such as the and is a founder of the Topical Group on Hadronic Physics of the American Physical Society. He has been a visiting scientist at Oxford University, TRIUMF in British Columbia, Jefferson Lab in Virginia, and Los Alamos National Laboratory. 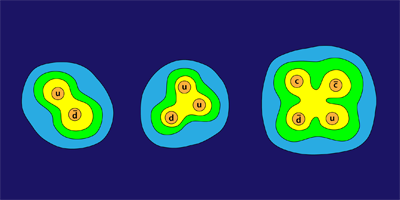 Two experiments have detected the signature of a new particle, which may combine quarks in a way not seen before. Read More »