Ping Koy Lam completed his B.Sc. degree from the University of Auckland in 1990. He worked as a engineer for Sony (Audio) and Hewlett-Packard (Semiconductor) prior to his postgraduate studies at the Australian National University where he obtained a Masters degree in theoretical physics, and a Ph.D. in experimental physics. He was awarded the Australian Institute of Physics Bragg Medal in 1999. He was an Alexander von Humboldt fellow at the Erlangen-Nürnberg Universität in 2000 and a CNRS visiting professor at Paris University in 2007. He is currently a professor and the group leader for Quantum Optics at the ANU. 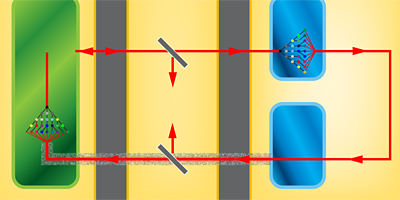 A secure communication channel that relies on quantum entanglement survives despite the noisy break up of the entanglement itself. Read More »