Riccardo Messina received his Ph.D. in physics in 2010 from the University of Palermo, Italy, and the University Pierre et Marie Curie in Paris. Since 2013, he has worked as a CNRS researcher at the Laboratoire Charles Coulomb at the University of Montpellier, France. His main areas of interest include near-field radiative heat transfer and Casimir and Casimir-Polder forces. He has studied both macroscopic bodies and atom-surface interactions, with a particular focus on out-of-thermal-equilibrium systems and many-body effects. More recently, he has been interested in the properties of elementary quantum systems in structured environments. 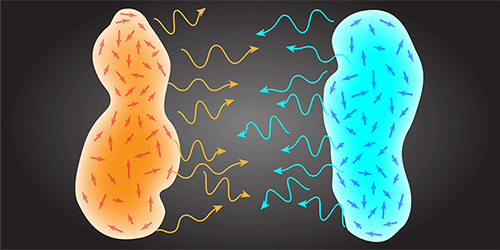 Sharing Heat in the Near Field

The maximum amount of radiative heat that can be transferred between two objects of any shape has been calculated for separations of less than the thermal wavelength. Read More »