Steven Carlip received an undergraduate degree in physics from Harvard in 1975. After seven years as a printer, editor, and factory worker, he returned to school at the University of Texas, where he earned his Ph.D. in 1987. Following a stint as a postdoctoral fellow at the Institute for Advanced Study, he joined the faculty of the University of California at Davis, where he is now a professor. His specialty is quantum gravity; his recent research has focused on quantum black holes, numerical approaches to the Feynman path integral, and “spontaneous dimensional reduction” at short distances. 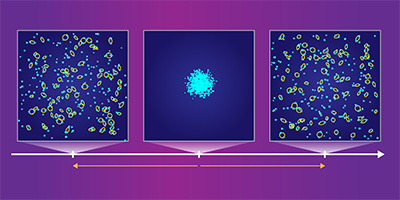 Arrow of Time Emerges in a Gravitational System

Study of masses interacting via gravity challenges the idea that special initial conditions are needed to give time a direction. Read More »