Thaddeus D. Ladd is currently a Senior Staff Research Physicist at HRL Laboratories, LLC, in Malibu, California. He received a B.S. in physics from Harvey Mudd College in 1998 and a Ph.D. in applied physics from Stanford University in 2005 as a Fellow of the Fannie and John Hertz Foundation. He continued research at Stanford while holding positions at the University of Tokyo and the National Institute of Informatics until 2009. His research interests focus on experimental semiconductor implementations of quantum information technologies and corresponding theoretical topics in quantum control. 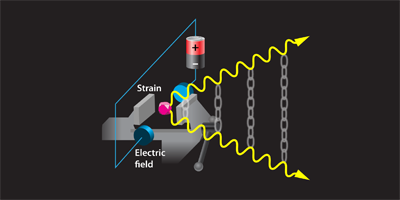 Researchers have applied a combination of an electric field and mechanical strain to a system of quantum dots in order to correct for asymmetries that usually prevent these semiconductor nanostructures from emitting entangled photons. Read More »