Quiet at the End

March 3, 2005• Phys. Rev. Focus 15, 8
Simulations show that two observers near a cosmic singularity such as a black hole cannot communicate.
×

They say in space no one can hear you scream, but if you are falling into a black hole, you can’t even hear yourself. According to the so-called asymptotic silence hypothesis, spacetime becomes so contorted that signals can’t travel any significant distance–not even from your mouth to your ears. In the 11 February PRL, a team of physicists and mathematicians says it has new evidence for the hypothesis, which also applies to other “singularities” such as the starting point of the big bang. A better understanding of singularities could eventually point to a correct solution to the disaccord between relativity and quantum mechanics.

Any critical concentration of mass, such as in the collapse of a massive star, will result in a singularity–essentially a gap in the universe that an observer cannot cross without ceasing to exist. The detailed properties of singularities depend on the full set of equations of general relativity, which are usually too complex to solve without some drastic simplifying assumptions. In the 1970’s, however, a Russian team conjectured that essentially all singularities exhibit asymptotic silence: As you approach the singularity, signals cannot travel indefinitely but face an increasingly limited “sphere of influence,” thanks to the hugely distorted “fabric” of spacetime. The team also expected spacetime to act chaotically as you approach the singularity–it should contort at rates that keep changing abruptly, rather than smoothly [1].

Asymptotic silence also showed up in simple big bang models of the Universe emerging from a singularity and had an important influence on modern cosmology. Researchers have demonstrated asymptotic silence with models of several simplified, highly symmetric versions of singularities, but the most general case has remained beyond reach because of the difficulty of solving Einstein’s equations.

Lars Andersson of the University of Miami and his colleagues now report computer simulations of a two-dimensional spacetime emerging from a big-bang singularity, and they believe it captures the behavior of most real singularities, including black holes. To make the singularity realistic, the team allowed different regions of space to expand at different rates. The expanding spacetime is essentially the time-reversed movie of the contraction an observer would see when falling into a black hole, but the results don’t depend on the direction of time.

Andersson and his colleagues found asymptotic silence and the chaotic behavior conjectured by the Russians but also something new. Among the many ways an observer could approach the singularity, there were certain special trajectories along which spacetime distorts at rates quite different from neighboring trajectories. The effect was separate from the chaotic phenomena associated with a single trajectory. The existence of such anomalies, called spikes, could be hard to prove rigorously, says co-author Claes Uggla of Karlstad University in Sweden, but it could be related to the breakdown of relativity theory at the short distances where quantum mechanics prevails. Several proposed quantum theories of gravity suggest that spacetime at this tiny scale is not a smooth continuum but rather a discrete lattice, where particles jump from one point to the next. The team also speculates that spikes in the big bang could have seeded gravitational waves that might someday be detectable.

George Ellis of the University of Cape Town says the result is a significant step toward understanding singularities. “In a sense, it’s confirming something the Russians have been saying, but by a much more solid method.”

Davide Castelvecchi is a freelance science writer in Rome. 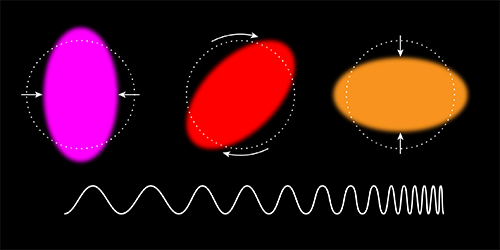 Feeling the Squeeze at All Frequencies 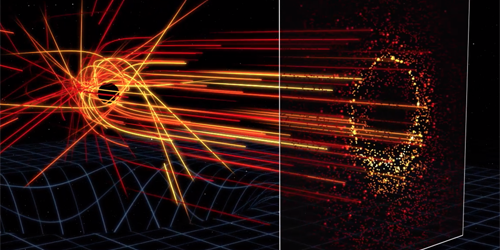 Getting a Black Hole’s Spin from its Photon Ring

The polarization of light in the bright ring around a black hole might reveal the object’s spin. Read More »