Focus: Xenon on the Verge of an Electric Breakdown

A spark flying between a metal doorknob and your hand is an intricate chain of electrical events. Atoms are pulled apart into electrons and ions, and currents flow through the air. In the 16 February Physical Review Letters, researchers report the first direct measurements of the sharply changing electric fields that pave the way for a visible flash in a precisely controlled laboratory arc. Their results provide concrete detail in an area where theoretical modeling remains scanty, and may offer a way to study electrical discharges in settings ranging from plasma televisions to lightning strikes.

Whether it’s a lightning bolt or the spark inside a bad switch, the process is the same: The voltage across a region of air becomes large enough to drive an electric current by creating a plasma. The process starts when a few stray electrons–accelerated by the electric field–knock into atoms and liberate more electrons, which continue the process. In carefully designed lab experiments the region between a pair of electrodes fills with plasma smoothly, starting at the positive end, with a wave front that sweeps quickly across to the negative end.

At the leading edge of this so-called ionization front is a narrow band of enhanced electric field, according to theory and indirect experiments, but theorists only vaguely understand what determines the field’s profile. Nor have experimenters been able to map the field profile directly, because inserting metal probes distorts the discharge. Researchers have tried to infer field strengths from the glow following the breakdown, but that light is feeble and only appears once the ionization is well under way.

In their experiment designed to get better electric field data, Gerrit Kroesen of the Eindhoven University of Technology in the Netherlands and his colleagues studied plasma creation between two broad electrodes separated by a few millimeters in a low-pressure xenon gas. During the microsecond-long transit of the ionization front, they shined brief pulses from two lasers into the gap. The first pulse made gas atoms emit fluorescent light, as electrons were excited to higher levels and fell back. The second laser pulse pushed already excited electrons to a still higher level, one whose energy depended upon the electric field. To get electrons to that field-dependent level required using just the right frequency of light–and therefore the right photon energy–for the second pulse. Finding that frequency, by looking for a reduction in fluorescence from intermediate levels, revealed the local electric field for the excited atoms. Although this principle is straightforward, getting the experiment to work was a “painstaking process,” Kroesen says. “It took us four years.”

The researchers focused on a single point between the electrodes and repeated the measurement 8,000 times, varying the frequency of the second laser to determine the field. They then varied the timing of the pulses to see how the electric field varied with time at that point. They found that the electric field spiked sharply, over less than half a microsecond, as the leading edge of the ionization front passed. Afterward, the field dropped quickly and smoothly.

Greg Hebner of Sandia Laboratories says that although theorists knew that the ionization front must begin with a high-field region, no one had shown how big or wide it was, or what happened after it passed. “This experiment really answered those questions,” he said. The observed spike in the field is very convincing, he adds. “That’s the way it should be.”

Measurements of Electric-Field Strengths in Ionization Fronts during Breakdown 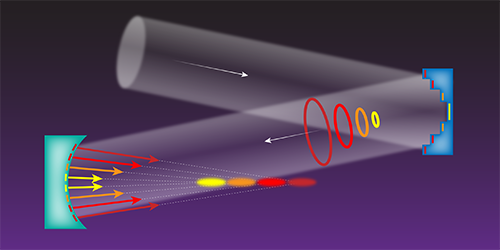 Viewpoint: Lining Up for Wakefield Acceleration

Focus: Magnetic Field Gets up to Speed

Simulations suggest that a relatively simple laser technique could produce femtosecond magnetic-field pulses, which currently are only available at a few major lab facilities. Read More » 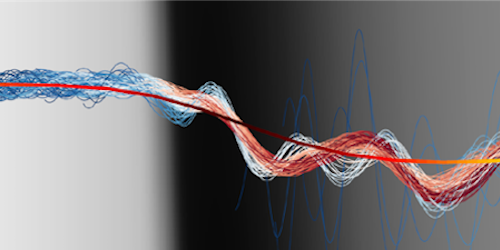 The output of a compact x-ray source based on laser-generated plasma can be boosted by tailoring the spatial structure of the plasma. Read More »

Measurements of Electric-Field Strengths in Ionization Fronts during Breakdown