April 2, 2010• Phys. Rev. Focus 25, 12
A ceramic surface with a “brush” of nanoscale pillars can tolerate a sudden change in temperature without cracking, which might be useful for high temperature industrial processes.
×

A piece of hot ceramic will crack if it cools down too quickly. Now researchers publishing in the 26 March Physical Review Letters have found a way to protect a hot ceramic against this thermal shock, which they studied by dunking a heated ceramic into room-temperature water. The team treated the surface of the ceramic so that it became covered with nanoscale protrusions, like a hairbrush. The material was able to withstand rapid cooling without cracking up, even when cooled from temperatures almost as high as its melting point. The result suggests a way of fortifying ceramics against rapid changes in temperature, such as those experienced in industrial processes involving molten metal.

Ceramics are valued for their resistance to high temperatures and chemical corrosion, but they can’t handle quenching, or rapid cooling, such as when hot metal is poured out of a ceramic bowl, exposing it to the cooler air. Quenching can set up a severe temperature gradient in the ceramic–a region over which the temperature varies dramatically from hot to cold. If the outer regions of the ceramic cool and contract while the internal parts remain hot, the surface of the ceramic cracks, reducing the overall strength of the material. To reduce the damage from thermal shock, researchers have tried mixing ceramics with more stable materials or developing ceramics that limit cracking to small areas.

Researchers from the Chinese Academy of Sciences in Beijing and China’s Harbin Institute of Technology in Harbin took a different approach. They roughened the surface of a ceramic made of zirconium, boron, silicon, and carbon by dissolving away some of the material with chemicals and plasma. This etching process created a “brush” of nanoscale pillars, which the team calls “nanofins” (They don’t look like fins, but they perform the reverse function of conventional cooling fins–preventing the rapid flow of heat). Team member Fan Song says the idea was inspired by the microscopic structure of dragonfly wings, which are covered in similar pillars. Surface tension prevents water from falling between the pillars and wetting the main wing surface. The researchers hypothesized that nanofins etched into ceramic would likewise repel water, creating a buffer of air between the hot ceramic and the relatively cold liquid used to quench it.

To test the effect of the nanofins, the team gradually heated 36-millimeter-long bars of their ceramic to different temperatures and then dunked them into room-temperature water. The unmodified ceramic showed cracks in its surface after being quenched from any temperature greater than 400 degrees Celsius. In a strength test, the material was only 15 percent as strong as before quenching. In comparison, the nanofin-covered ceramic showed no cracks and retained its original strength even when quenched from 3000 degrees Celsius, close to its melting point.

Based on a mathematical model of heat transfer between ceramic and water, the researchers propose that the temperature gradient after quenching is largely confined to the nanofin layer, which is about 400 nanometers thick. The nanofins are free to expand and contract along their length, so the nanofin samples don’t crack when exposed to water. Song says the method is likely to work for many different ceramics, but the nanofin layer will have to be thicker for larger chunks of material.

The experimental findings are “remarkable,” says David Green, a materials scientist at Pennsylvania State University in University Park. He says the quenching may lead to a more complicated situation than the authors propose, because water vapor might get mixed with the air around the nanofins. He wonders if quenching in other liquids would lead to different results. Mats Johnsson, an inorganic chemist at Stockholm University, points out that the nanofins might be easily worn down by friction, which could prevent them from being used in situations where there is a lot of contact with other machine parts. 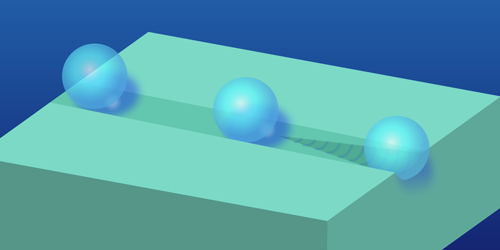 A Penetrating Look at Ice Friction

A new approach for studying friction on ice helps explain why the ease of sliding depends strongly on temperature, contact pressure, and speed. Read More »

Physicists have spent decades uncovering similarities in how disordered materials deform. Now they are trying to apply these results to the design of new materials. Read More »