May 27, 2011• Phys. Rev. Focus 27, 21
Complex structures appear spontaneously in a plasma in a strong magnetic field. The work explores a new regime of plasma behavior that could be relevant for industry and demonstrates a new technique for imaging plasma dynamics.
×

Sometimes patterns form spontaneously in unexpected places, such as the washboard pattern on a dirt road, or the stripe formations of certain clouds, and it’s the job of physicists to figure out why. In the 27 May Physical Review Letters, a team reports another surprising pattern–discovered accidentally–and tries to explain it. They show that a plasma in a magnetic field develops filaments that form a range of structures, including quasi-crystalline structures, spirals, and concentric circles. The appearance of structure could have implications for the future use of plasmas in industrial settings, and the technique for visualizing the structures might also be used by others to study the internal motions within plasmas.

Plasmas enriched with microscale particles are called dusty plasmas. The particles become charged by the plasma and in some cases can dominate its behavior. They appear in industrial processing, such as semiconductor manufacturing, and also in planetary environments, such as in Saturn’s B ring. Magnetic fields are important in astrophysics and possibly in future industrial processes, but few researchers have studied magnetic effects in dusty plasmas. Mierk Schwabe and her colleagues at the Max Planck Institute for Extraterrestrial Physics in Garching, Germany, planned to study magnetized dust particles in a plasma, but when they saw structures appearing spontaneously, they decided to study the patterns instead.

The team injected argon, neon, krypton, or air into a vertically-oriented cylindrical chamber located inside a large magnet. To create plasma, they applied an oscillating (radio frequency) electric field to the gas using two disk-shaped electrodes located near the top and bottom of the chamber. They then injected several-micron-diameter plastic microparticles. The particles levitated in a single layer above the lower electrode, held aloft by the strong electric field gradient produced near the edge of the plasma as it interacted with the applied field. The researchers illuminated the particles by shining laser light in a plane through the chamber.

Simple filaments have been known to form in some types of plasmas but have never been seen in a radio-frequency plasma in a magnetic field. “We expected to see a uniform plasma discharge without any filamentation,” says Schwabe. Instead they found that filamentation and complex patterns formed, varying with the gas identity, pressure, and strength of the electric and magnetic fields.

When the magnetic field was weak, no filaments appeared, and the microparticles formed a crystalline lattice in the chamber. The whole lattice rotated slowly, almost rigidly around the center of the chamber, an effect the team has observed before and which results from a combination of the electric and magnetic fields within the plasma and collisions with plasma ions.

As the magnetic field increased, a regular array of vertical filaments appeared in the plasma, and the overall rotation of the microparticle cloud broke up into localized vortices around the filaments. The circling was not due to the textbook situation of charged particles orbiting in response to a magnetic field, as such orbits would have had a radius of centimeters, rather than the millimeters observed.

To explain the particle patterns, the researchers propose that as the plasma density increases along the filament lines, the electrons are trapped along the vertical magnetic field lines, but the heavier ions move outward. The magnetic field turns this outward flow into spiral-shaped orbits, and the microparticles become swept along by these ions and pushed into vortices around the filaments.

Without the particles present, the team saw the plasma filaments form into a series of patterns, when viewed through the top electrode, which was transparent. The patterns ranged from disordered clumps to spirals and circles as large as the chamber, depending on conditions. The team admits that they don’t have detailed theories to explain all the observations, but they suggest that the filaments might form because the magnetic field prevents electrons from diffusing freely, once small density fluctuations appear. However, this idea is still preliminary, says Schwabe.

“The work demonstrates for the first time how charged dust microparticles can be used as probes for determining the local plasma structures of different forms,” says Padma Shukla of the Ruhr University Bochum, Germany. He also warns that, based on these results, the smooth, filament-free plasmas that may be needed for future industrial applications involving magnetic fields and radio frequencies “may not be achievable.”

Pattern Formation in a Complex Plasma in High Magnetic Fields 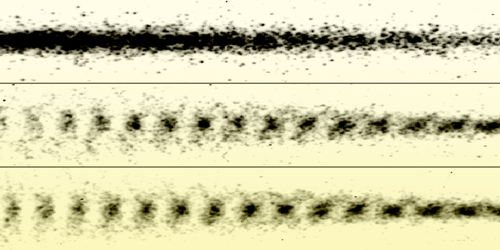 Pattern Formation in a Complex Plasma in High Magnetic Fields