February 25, 2011• Phys. Rev. Focus 27, 8
Experiments show that the spin of an electron can cause its path to curve as it moves through a semiconductor, even in the absence of scattering, which may be important for future devices.
×

Baseball pitchers often spin the ball to make it curve to the left or right. Spinning electrons moving through a semiconductor can also follow curved paths because of the way they ricochet off of stationary atoms and other particles. But in the 11 March Physical Review Letters an experimental team shows that this “spin Hall” effect should persist even when the electrons move smoothly, without scattering, as would occur in a future generation of very small devices. The results suggest that the effect will provide a powerful tool for controlling currents of both spin and charge in future “spintronics” devices.

Researchers understand that the spin Hall effect is linked to the so-called spin-orbit interaction between an electron’s spin and its physical motion. Previous experiments have demonstrated the effect when electrons move through a material in a chaotic, pinball fashion, buffeted by frequent collisions. When electrons bounce off obstacles, their spin gives them an additional kick to the right or left–depending on their spin direction–much as spinning billiard balls get when they collide with obstacles.

Eight years ago, however, theorists suggested that subtle details of the spin-orbit interaction might cause a similar sideways drift even in materials through which electrons glide freely, without scattering. To look for this “intrinsic” spin Hall effect, Hui Zhao and his colleagues at the University of Kansas in Lawrence sought to take a snapshot of electron flow on a timescale so short that there could be no scattering.

The team experimented on electron currents they injected into a sample of gallium arsenide. They first used lasers to create two equal streams of electrons travelling in opposite directions, one stream having clockwise spins (spin down), the other counterclockwise (spin up). Together, these two streams created a pure spin current–a net flow of spin, or angular momentum, but no net current of electric charge.

This pure spin current should create a small charge current in the sideways direction (sometimes called the “inverse” spin Hall effect) because the two component currents should bend in the same direction. For example, if eastward and westward currents both curve to the north a bit, they generate a small northerly movement of electrons. To look for this effect, the team used a second laser to image the sideways charge shift. They found a movement sideways of about 0.1 nanometers that was evident in a time of only about 0.1 picoseconds.

To check whether the spin Hall effect was caused by electron scattering, the researchers measured how quickly the initial spin current disappeared due to scattering of electrons and found a time of roughly 0.45 picoseconds. Since the sideways current appeared well before many scattering events could have taken place, they concluded, the current couldn’t have been caused by scattering.

“I believe it’s the first direct measurement of the inverse spin Hall effect on times shorter than the scattering time,” says Allan MacDonald of the University of Texas at Austin. He says the biggest impact of this work may ultimately be in understanding electron behavior over long times in larger devices.

Zhao says an electron in a semiconductor moves anywhere from 10 to 100 nanometers between two subsequent collisions. Devices in today’s integrated circuits have dimensions of around 50 nanometers, soon to approach 20 nanometers, so electrons will experience very few collisions in next-generation devices. “The spin Hall effect based on scattering isn’t going to work,” says Zhao. “But the intrinsic effect may provide a technique for generating and detecting spin currents even in the smallest devices.” 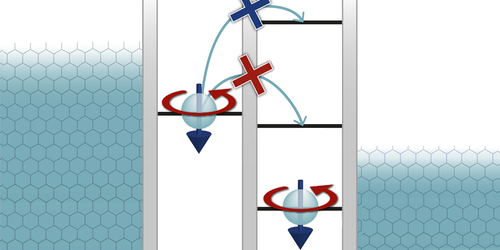