Above are the three winners in the video category of the APS Division of Fluid Dynamics’ Milton van Dyke Award, given each year to videos based on artistic value, scientific content, and originality. Accompanying papers are being published today in Physical Review Fluids. See these videos with author-written captions, along with other entries, at the Gallery of Fluid Motion.

The first video shows what happens when an upward-flowing jet of gas that oscillates left and right is blown sideways by a “crossflow”—here, the dominant airflow in a wind tunnel. The data, based on imaging tiny particles in the flow, reveal a pair of vortices that form downstream whose rotation direction is opposite to those that would form if there were no oscillation in the original jet.

In the second video, particles in water reveal the vortices generated by an immobilized starfish larva trying to swim. Experiments with algae in the water, along with separate simulations, show that the more vortices, the more efficiently the larva eats the microbes. However, additional vortices slow its swimming speed, so the larva must constantly adjust the number of vortices it creates.

In the third video, physicists create “pour paintings” following the techniques of painter Holton Rower and explain the colorful patterns that appear in his work.

This research is published in Physical Review Fluids.

Sweeping jet from a fluidic oscillator in crossflow 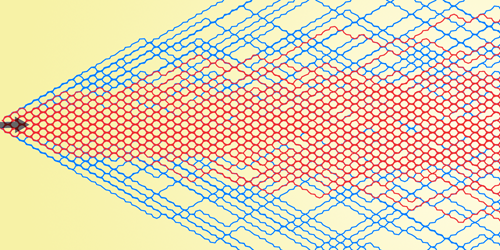 Sweeping jet from a fluidic oscillator in crossflow