Your Hard Drive May Be Listening

March 4, 2019• Physics 12, 24
Researchers demonstrated that a hard drive can be used as a microphone, allowing attackers to listen in to conversations.
×

If you are already nervous about malicious computer attacks, then here’s some unwelcome news: there are many ways in which our technology is vulnerable to attacks based on physics, rather than on software. University of Michigan computer scientist Kevin Fu and his colleagues have found several unsettling ways that sound waves and other sources of interference could be used to commandeer household devices and personal electronics. At the American Association for the Advancement of Science (AAAS) conference in Washington, DC, two weeks ago, he reported his latest scary find: your computer hard drive could—without you knowing it—be used to record your voice.

Sensors are ubiquitous and essential—think of the thermometers in freezers for human eggs, accelerometers in airbags, and voltage monitors in pacemakers. The devices reading these sensors almost universally accept their data without question, but Fu and his colleagues have repeatedly shown that, using carefully crafted electromagnetic and acoustic interference, an attacker can take control of sensor outputs.

For example, the team has shown that appropriate electromagnetic waves can cause a thermocouple—a sensor that produces a voltage to represent the temperature—to be read as showing degrees Fahrenheit when it was actually at room temperature. They similarly caused the voltage sensor in a pacemaker to provide inaccurate signals.

The researchers produced additional mayhem with sound waves, demonstrating that accelerometers in Fitbits, smart phones, and other devices are vulnerable. In one experiment, they showed that certain high-frequency sound waves can cause a Fitbit to add steps without moving. In another test, they used a specific acoustic waveform to force the graph of the voltage output of an accelerometer to spell out the word “WALNUT.” This waveform worked even when the sound was surreptitiously embedded in a sound track, so an attacker could, in principle, control your phone’s accelerometer by tricking you into watching an online video.

The team’s latest trick is to turn a hard drive into a microphone. They tapped into the feedback system that helps control the position of the read head above the magnetic disk. When the head is buffeted by sound waves, the vibrations are reflected in the voltage signal produced by the drive’s position sensors. By reading this signal, Fu and his colleagues were able to make high-quality recordings of people speaking near the drive.

In another test, they showed that music played nearby could be recorded with high enough fidelity that the music recognition app Shazam could successfully identify the song. Malicious software could use this technique to record audio and then secretly upload it to a remote site, thus bugging a room without ever planting a microphone.

The team proposes defenses against every attack they develop, but Fu is still concerned. He worries most about the security of sensor-dependent systems that make independent decisions, such as temperature controllers in embryo labs, self-driving cars, and even spacecraft. “We just blindly trust these sensors,” he says. The industry needs to take these threats more seriously, and “computer scientists need to spend more time in physics labs.”

David Ehrenstein is the Focus Editor for Physics.

Turning a Quantum Computer into a Time Crystal 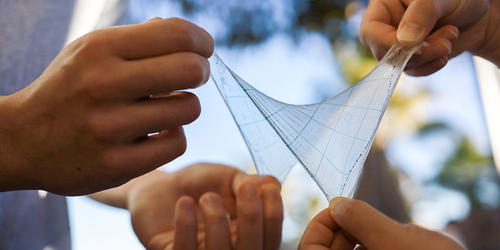 A technique that allows researchers to fabricate 42,000 elastic transistors per square centimeter takes them a step closer to creating electronic devices that look and behave like skin. Read More »