A New Way to Measure Magnons

The field of spintronics aims to exploit the magnetic and electron-spin properties of materials to usher in a new generation of information technologies. In the relevant materials, electron spins can be disturbed so that they precess collectively, forming quasiparticles called magnons. Conventionally, magnons are thought to interact with magnetic fields via only their spin magnetic moment (SMM). In new theoretical work, Robin Neumann of Martin Luther University of Halle-Wittenberg, Germany, and colleagues identify an additional property possessed by these quasiparticles—orbital magnetic moment (OMM)—and they propose experiments to measure it [1].

A magnon’s SMM is governed by the host material’s spin texture—the configuration that the spins of its electrons adopt in their undisturbed state. In contrast, its OMM arises from the interaction between the spins and the orbital motion of the electrons—a phenomenon known as spin-orbit coupling. A magnon’s OMM is weaker than its SMM, and its orientation can vary independently.

Neumann and colleagues predict two ways by which the OMM of magnons could be probed. The first method involves measuring the magnetic moment of a material called a kagome antiferromagnet, in which electron spins are aligned in a distinct pattern within a single plane. Outside of this plane the SMM vanishes, meaning any detectable out-of-plane magnetic signal must be due to the OMM. In the second method, the researchers find that the OMM could be measured in a broad class of magnets subjected to a temperature gradient. This gradient causes the OMM of the magnons to accumulate at the surface of the sample as a detectable magnetization density. Such measurable effects of magnons’ OMM, the researchers say, will influence the design of future spintronics devices. 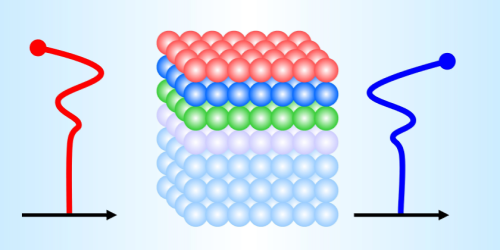 Magnetic Oscillations at a Metal Surface

Predicted 40 years ago, magnetic Friedel oscillations are finally observed in the layers beneath an iron surface. Read More »

Topological Phases Beyond the Hofstadter Butterfly

A useful metric for characterizing the topological behavior of fermions can be extended to bosonic systems as well. Read More »