July 16, 2021• Physics 14, 101
Researchers have demonstrated a faster way to turn light transmission on and off in a liquid crystal.
×

Liquid crystals, used in visual displays for more than 50 years, can be electrically switched between two molecular arrangements: one transparent and the other opaque. A newly developed liquid crystal can switch states more rapidly than those in current use [1]. If the same speedup can be achieved in materials that work at lower, more practical temperatures, new types of rapidly responsive electro-optic devices could result, such as virtual reality displays.

Conventional liquid-crystal displays (LCDs) use so-called nematic materials, in which the molecules typically have rod-like shapes. The molecules are free to move around as if in a traditional liquid, but their rod axes all point in the same general direction, rather like a crowd of people milling around, all with their heads oriented upward. That direction, characterized by a parameter called the director, affects whether polarized light passes through the material or not and thus whether an LCD pixel is bright or dark.

Controlling the director is possible with electric fields. In an LCD pixel, a layer of liquid crystal is sandwiched between two electrodes. A voltage applied to the electrodes generates an electric field that may realign the director, producing a so-called Fréedericksz transition that brings about a change in the light transmission.

Some liquid crystals can also form another ordered phase, in which the molecules, in addition to being aligned, are stacked in layers. In this so-called smectic phase, the molecules move freely within a layer but rarely hop between layers. The Fréedericksz transition hasn’t been previously seen in smectic liquid crystals because reorienting the director would change the layer thickness, which would require too much energy.

However, the possibility of obtaining a Fréedericksz transition in a smectic phase looks appealing, says Ivan Dozov, of the University of Picardy Jules Verne (UPJV) in France. The layered ordering in smectics makes the molecules respond faster than in nematics, and so the light transmission could potentially be switched on and off more abruptly. “Fast response times are extremely important for applications and are eagerly sought after,” he says.

Dozov, along with UPJV colleague Claire Meyer and their co-workers, figured that such switching could be achieved if the liquid crystals had not one but two directors, pointing in different directions. Then perhaps one director could be switched—with a corresponding change in optical properties for polarized light aligned with that director—while keeping the other director, which determines the layer spacing, unchanged.

This strategy demands a molecule whose shape is like a flat board, with two axes that can be oriented independently. Switching is then like rotating the orientation of the faces of boards in a stack, while their end-to-end length remains unchanged—comparable to the way Venetian blinds are rotated to shut out light.

To realize this idea, the researchers used organic molecules called BNA-76, which are shaped a little like bananas. These molecules form a smectic phase in which the molecules span adjacent layers in a way that creates two board-like axes in each layer. To prevent the smectic phase from forming a solid crystal, the BNA-76 molecules must be mixed with a second compound that, by itself, forms a nematic phase.

The researchers found that the mixture undergoes a Fréedericksz transition at around 100 °C with 4 volts applied across it. That switch causes a change in the transmission of polarized light through the material. As the team hoped, the switching is fast: it happens in less than a millisecond, around 30 times faster than in typical nematic phases.

The idea of faster switching in such “biaxial” smectics has been around for some time, says liquid-crystal expert Geoffrey Luckhurst of the University of Southampton in the UK, but achieving it has proven to be “a challenging task.” This demonstration that it is feasible is “highly exciting,” he says.

Materials physicist Oleg Lavrentovich of Kent State University in Ohio agrees. The work is an “example of how subtle modifications in the structure of organic molecules can endow a material with spectacular physical properties,” he says. These new materials, he says, “might one day find applications in emerging technologies such as augmented reality or 3D informational displays.”

But for that to happen, he adds, the operating temperature will need to be lowered. Dozov agrees and thinks that lower temperatures should be possible with other molecules (or mixtures) that have similar board-like structures.

Device Acts as Both Solar Cell and Battery

A new photoelectric device can convert light into charge that it can then store indefinitely. Read More »

Force Scanning on a Shaky Membrane 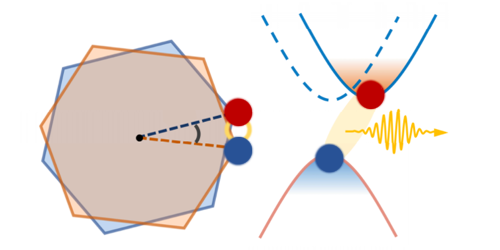 A New Twist on Exciton Lifetimes

Varying the twist angle between layers of a 2D semiconductor can prolong the duration of resonances that give the material its unique optoelectronic properties. Read More »