Skyrmions Made from Sound Waves

Skyrmions are topologically stable quasiparticles that can form in a vector field, such as the spin texture of a magnetic material. As such, conventional wisdom suggests that skyrmions should not appear in acoustic waves, which are spinless scalar waves. Now, Ming-Hui Lu of Nanjing University in China and colleagues have created acoustic skyrmions using an acoustic metasurface and an array of loudspeakers [1]. The result extends the range of media known to sustain skyrmions and could lead to new ways of manipulating microscopic objects.

The key to the new result is a property of acoustic waves that the researchers say is often overlooked: Although the density oscillations that constitute these waves have no intrinsic orientation themselves, they are accompanied by coherent motion of the local acoustic medium. It is in this 3D velocity field that the team formed their acoustic skyrmions.

They projected sound from six pairs of speakers across an acoustic metasurface—a hexagonal tabletop perforated by a hexagonal lattice of holes. The sound waves became trapped by the holes, decaying exponentially with height above the surface. A periodic pattern of skyrmions formed at the center of the metasurface, where the standing acoustic waves converged and interacted. The researchers detected the skyrmions by mapping the 3D velocity of the air above the metasurface and found that they could manipulate the skyrmions’ configurations by modulating the acoustic waves. Changing the amplitude of the waves altered the shapes of the skyrmions, while changing the phases of the waves shifted the skyrmions across the metasurface. The researchers aim to explore the formation of other types of topologically stable structures in sound waves and use them to create acoustic tweezers. 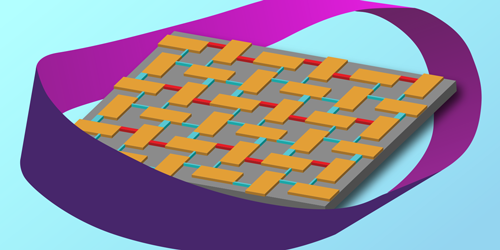 Waves of vibration moving through the walls of a pipe can carry orbital angular momentum that could be used for several purposes, according to new theoretical work. Read More »