A Lower-Pressure Route to Superconductivity

In October 2020, Elliot Snider of the University of Rochester, New York, and colleagues demonstrated room-temperature superconductivity at high pressures. Now, using a new synthesis method, the group has created a material that’s superconductive at a similar temperature but at a lower pressure [1]. The new technique could lead to the creation of further novel superconducting materials and thus to new opportunities to test theories of superconductivity.

Like last year’s work, in their new demonstration, the researchers used a diamond anvil cell to create a hydrogen-rich compound under high pressure. In the previous experiment, the researchers combined hydrogen with carbon and sulfur. This time they combined the hydrogen with yttrium, a reactive transition metal, to create superconducting yttrium superhydride. Specifically, the researchers placed gaseous hydrogen and solid yttrium between two diamond anvils, with the two materials separated by a thin sheet of palladium. The palladium layer shielded the yttrium and kept it from oxidizing, but it also acted as a catalyst, helping to transport hydrogen atoms into the yttrium.

Erika K. Carlson is a Corresponding Editor for Physics based in New York City.

A decade after it was theorized, scientists in China have synthesized a new type of superconductor, the superhydride . Read More »

Multiphoton Generator on a Chip

A device for producing up to six photons in a single event could open new doors to quantum technologies. Read More » 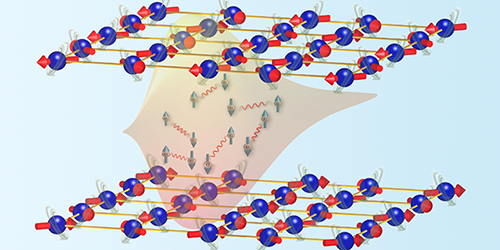 An experiment finds that spin fluctuations in an iron-based superconductor have a preferred direction, suggesting a potential mechanism for superconductivity in these materials. Read More »