This article is part of a series of pieces publishing today on the experiences of LGBTQ+ physicists. See also: Q&A: Seeking Diversity When Faced with Adversity; Podcast: Life as an LGBTQ+ Physicist; and Opinion: Wanted: LGBTQ+ Allies.

The last few decades have seen an increase in the visibility of gender and sexual minorities—commonly referred to as LGBTQ+ individuals—both in society broadly and in physics more specifically (Fig. 1). As a result, there has been a corresponding jump in the desire to understand the experiences of LGBTQ+ physicists. Now, Ramón Barthelemy of the University of Utah and colleagues explore in detail the findings of a survey of LGBTQ+ people working in physics [1, 2]. The team finds that despite improvements in working conditions for many LGBTQ+ physicists, harassment and discrimination continue to be problems that can create negative workplace climates and impact retention. Their findings reinforce the need for continued work to make physics workplaces welcoming to all.

Although physicists often describe their discipline as curiosity-driven and open to new ideas, demographic data show the opposite, with a lack of diversity in terms of race, gender, and other characteristics. People from these historically excluded groups can face a variety of oppressive forces—including racism and sexism—when pursuing careers as physicists [3]. As a result, many of these groups remain underrepresented in this field.

Previous research has explored the maintenance of gender disparities in physics, examining how practices in the field reinforce its associations with masculinity, undermining efforts to include and support women [4, 5]. Other studies have documented the experiences of LGBTQ+ professionals in fields across the sciences, finding reports of harassment, limited professional advancement, and negative perceptions of workplace environments [6, 7]. However, there is limited understanding of how the workplace environment impacts the experiences and retention of LGBTQ+ physicists, something the new study explores.

In their study, Barthelemy and colleagues examine data presented in a 2016 survey of 324 LGBTQ+ and ally members of the American Physical Society (APS), the publisher of Physics. Specifically, the team looks at reported experiences from LGBTQ+ individuals of their physics-workplace climate. For example, do they feel social pressures to stay silent about their personal lives or their identities? Based on previous scholarship, the team uses a definition of workplace climate that incorporates the behavioral and psychological aspects of a person’s interactions with their colleagues. The definition also considers the differing perceptions of an issue a person can have depending on their position at an institution and on how aligned their views are with the predominate ones of their colleagues.

The team finds that 90% of respondents agree with the statement that “the atmosphere for LGBTQ+ employees is improving.” But they also find—quantitatively and qualitatively—that those who experience or observe exclusionary or harassing behavior based on gender, gender expression, gender identity, sexual orientation, or sexual identity say that they are potentially less likely to stay in the field. In addition, those who report feeling comfortable enough to be “out” to colleagues about their LGBTQ+ identities report greater comfort in the workplace [2]. This finding fits with the results of a recent study that found a positive correlation between outness at work—how many colleagues a person is open with about their sexual identity—and scholarly productivity for academic professionals in science, technology, engineering, and math (STEM) [8]. That said, Barthelemy and colleagues find that the experiences of LGBTQ+ physicists are unequally distributed across different identities. For example, trans and gender nonconforming physicists report more negative experiences than their LGB peers, men experience more positive climates than women, and LGBTQ+ persons of color are less likely to be out in their workplace.

Most respondents of the 2016 APS survey were undergraduate or graduate students, and their experiences provide a snapshot of the outlook for the next generation of physicists. It is thus relevant to note that those who said they had experienced or observed exclusionary behaviors but had positively rated their workplace climate planned to remain in the field. That finding indicates that being in an inclusive environment (not just one that lacks hostility) may counter experiences of exclusion. It also suggests that inclusive workplaces have a protective effect that can help ensure that the physics community retains the scientific expertise of early-career LGBTQ+ physicists.

The importance of psychological and physical safety in the workplace for minority groups in physics is a key takeaway of the 2016 survey, but the new study adds an important caveat. These protective policies are unevenly available to transgender physicists because of inadequate state and institutional policies governing nondiscrimination in hiring, health care, and other aspects of employment. Barthelemy and colleagues connect this finding to other studies that have demonstrated related challenges for physicists of color, particularly Black and disabled physicists, emphasizing the importance of utilizing intersectional frameworks when considering interventions. The nuance provided by such intersectional analyses can help in understanding the compounded and interrelated impacts of racism, ableism, sexism, and heteronormativity and suggest new interventions.

Exploring the impact of workplace climate is also important when it comes to implementing inclusive practices. Barthelemy and colleagues reinforce the need for equitable practices across STEM when it comes to hiring, training, evaluating, and retaining scientists because institutional policies can differentially impact members of minority groups [9]. We should also acknowledge that one third of the respondents to the original survey reported being out to everyone—these physicists are already doing the daily work necessary to integrate their personal and professional lives and to educate the broader community. We need to continue to support these out physicists so that all LGBTQ+ individuals who wish to be “out” can feel safe to make that move. Let’s learn from these findings and continue to work toward making physics the safe and inclusive profession it should be.

Allison Mattheis is an associate professor in the Division of Applied and Advanced Studies in Education at California State University, Los Angeles. A former secondary school science teacher, she now supports the development of educators and educational leaders at all levels. Her research interests include the experiences of LGBTQIA+ individuals in STEM fields and support for social justice in education. She is a member of the NSF-supported ADVANCEGeo team, working to counter harassment and discrimination in the geosciences. As a former ARC network Virtual Visiting Scholar, she conducted a ten-year review of understandings of gender in STEM higher education research.

The Lure of Cement

Physicist Ankita Gangotra pours over innovative technologies and policy initiatives to reduce the carbon dioxide emissions of the US cement industry. Read More »

Fooling Around with Boxes

Researchers have uncovered the optimal design for a lidded carboard box to ensure that the lid drops as quickly and smoothly as possible—and it’s not what you might think. Read More » 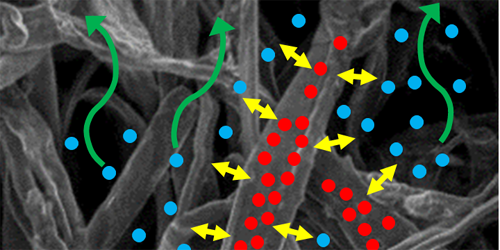