November 18, 2022• Physics 15, s159
Experiments disprove the general assumption that more than one wave mode is needed to produce a spectral pattern called a frequency comb.
×

Frequency combs—sets of sharp, equally spaced spectral lines—have revolutionized metrology. In particular, they have led to highly accurate time and distance measurements. Conventional wisdom suggests that creating a frequency comb requires coupling at least two wave modes of a system. But Jana Ochs at the University of Konstanz, Germany, and her colleagues have now demonstrated a comb that needs only one such mode [1]. This property gives the comb advantages including an easily adjustable structure and a low required power.

Frequency combs are typically produced using light, but they can also be generated using mechanical vibrations, such that each spectral line corresponds to a different vibrational frequency. Unlike optical combs, these so-called phononic combs can be tuned in situ. Until now, they have been created through a nonlinear coupling of two or more modes of vibration.

Ochs and her colleagues performed experiments on a tiny, vibrating device known as a nanomechanical resonator. This device exhibits a single vibrational mode that is excited by a periodically applied external driving force. The low-frequency oscillations in the amplitude and phase of this driven mode are highly nonlinear. These oscillations modulate the device’s vibration, giving rise to a phononic comb.

The researchers found that they could control the number and spacing of the comb’s spectral lines by adjusting the frequency and power of the driving force. They say that their experiments provide insight into the nature of frequency combs and reveal a new mechanism for producing such combs. However, the team stresses that more work is needed to fully understand how this mechanism works.

Ryan Wilkinson is a Corresponding Editor for Physics Magazine based in Durham, UK.

Studies of how a nitrogen-vacancy center’s spin interacts with a surrounding 2D layer of spins could lead to new platforms for quantum metrology and simulation. Read More » 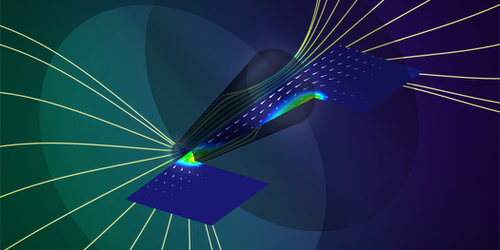 For a long time, researchers assumed that phonons could not contribute to the thermal Hall effect because of their lack of charge and spin. New work challenges this assumption. Read More »