January 13, 2023• Physics 16, 8
A simulation shows in detail why the “burst-and-coast” swimming strategy is often more efficient than continuous swimming.

Some species of fish swim in a burst-and-coast mode, in which they alternate between undulating their bodies and holding still while coasting. This mode is more difficult to model than continuous swimming, but researchers have now performed detailed simulations of intermittent swimming in order to understand its benefits for fish and its potential uses for fish-like robots [1]. Video from the simulations shows a virtual fish first accelerating by wiggling and then coasting smoothly to nearly a standstill. The team found that the lack of propulsion during the coasting phase can be offset by the reduction in drag from a more streamlined body posture. However, this strategy is only efficient when the parameters, such as the length of the burst interval, are optimized.

While researchers have generally understood that intermittent swimming can be more efficient—based on experiments and analytical models—a detailed simulation has been difficult, in part because of the nonsteady nature of the flow. Gen Li of the Japan Agency for Marine-Earth Science and Technology (JAMSTEC) and his colleagues have developed a two-stage protocol in which they first simulate a series of long burst-and-coast runs with a range of amplitudes and frequencies for the fish undulations. They then cut and paste snippets from this simulation database to recreate arbitrary burst-and-coast swim patterns.

This procedure—which they have used previously [2]—allowed the researchers to find the optimal values of quantities such as the frequency and amplitude of the undulations without requiring huge computational resources. It also allowed them to make a detailed comparison of the efficiencies of intermittent and continuous swimming. The video shows one of the long simulations that was used in the database, beginning with 15 tail-beat cycles, followed by a period of coasting.

Li and his colleagues were able to monitor the evolution of many quantities, such as the drag, input power, and thrust, all of which exhibit rapid changes that were not previously observed. They found that burst-and-coast swimming can require less energy than continuous swimming, but the strategy can turn very inefficient if, for example, the length of each burst-and-coast cycle is too long. Real fish have presumably had millions of years to perfect this type of swimming, but builders of fish-like robots will need to tune the swimming parameters carefully to minimize the energy expenditure, the researchers write.

Memories Become Chaotic before They Are Forgotten

A model for information storage in the brain reveals how memories decay with age. Read More »

How Nature’s Donuts Get Their Wrinkles

A new model explains the wrinkling patterns seen in nature’s donut-shaped objects, such as those found in jellyfish. Read More » 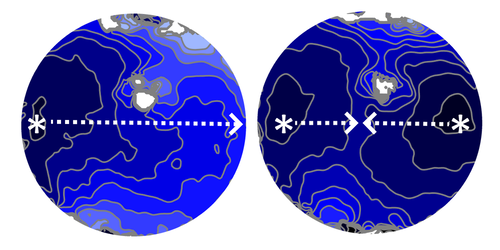 Computer simulations and experiments with cardiac cells identify signatures of a condition in which two sets of pacemaker cells lead to an abnormal heartbeat. Read More »