March 6, 2014• Physics 7, s29
A slight revision of general relativity can avoid an enormously large (and observationally inconsistent) cosmological constant, assuming that our Universe eventually collapses back on itself.
×

Because the cosmological constant is, by definition, constant throughout time and space, it’s natural to associate it with the energy of the vacuum. Unfortunately, if one calculates the vacuum energy density from quantum zero-point fluctuations (i.e., when particles pop in and out of existence), the result is a factor of higher than the value deduced from astronomical observations.

Theorists have tried to “tune” the cosmological constant by assuming that the quantum vacuum energy is cancelled out by some additional energy (for example, coming from a Higgs-like particle). But these solutions have proven to be unstable. Nemanja Kaloper of the University of California, Davis, and Antonio Padilla of the University of Nottingham, UK, have devised a new strategy, in which they rewrite Einstein’s general relativity equations. The new equations effectively cancel out the input from quantum fluctuations, by treating the cosmological constant as an average of the matter contribution over all of space and time. This produces a relatively small cosmological constant, but it also predicts that our current accelerated expansion will somehow stop in the future and reverse direction. – Michael Schirber 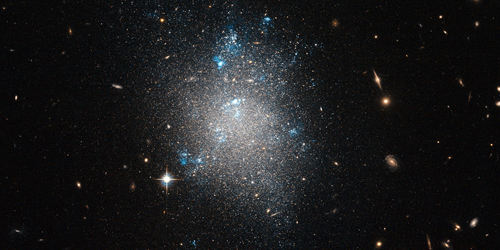