July 17, 2015• Physics 8, 69
Classical fluid theory can't explain a puddle that spreads and then stops. A new theory solves the problem by incorporating intermolecular forces between the liquid and the solid underneath.
×

Place a liquid drop on a flat plate, and it will spread out into a puddle. Surprisingly, no theory has been able to explain the spreading from start to finish. A new model shows that incorporating relatively long-distance intermolecular forces between the liquid and solid plate leads to a modified surface tension that can naturally explain the spreading. The theory reproduces several observations, such as the spreading rate and the slope at the puddle’s outer edge—a measure of the different forces acting at the liquid-solid-air boundary. The theorists plan to use the model to tackle more difficult problems, like flows over rough surfaces or through porous materials.

The main forces acting on a puddle are gravity, viscosity, and surface tension. Surface tension is a resistance to increasing the surface area of a liquid and is responsible for a small stream of water breaking up into drops, for example. By balancing surface tension and gravity, physicists in the 19th century were able to predict the final shape of a puddle. The trouble was that they couldn’t explain how the puddle got there. For a spreading puddle, straightforward fluid physics calculations imply that the viscous force (which resists the liquid's deformation) becomes infinite at the puddle’s leading edge, or “contact line” [1]. In other words, the theory says that puddles are blocked from spreading.

Obviously puddles do spread, so physicists have looked for ways to correct their models. One popular solution is to assume that a thin microscopic film coats the surface ahead of the puddle. Such precursor films have been observed for puddles that expand out completely to a thin flat sheet—the so-called "complete wetting" case—but they can’t explain puddles that spread a short distance and then stop (partial wetting).

Ruben Juanes and his colleagues at the Massachusetts Institute of Technology (MIT) in Cambridge have now developed a spreading model that can describe both partial wetting and complete wetting. Their success comes from their mathematical treatment of long-range intermolecular forces—like the van der Waals attraction—between the molecules in the solid plate underneath and the molecules at the top surface of the liquid. The liquid molecules in this top layer are critical because they determine the surface tension, which ultimately controls the spreading process.

Across most of a puddle, the liquid surface is so high above the solid plate that interactions between those liquid molecules and the solid are negligible. But that changes near the contact line. “When the liquid height is less than around 100 nanometers, the [solid and liquid surface] molecules start ‘feeling’ each other,” explains MIT team member Amir Pahlavan. Although previous work has included these liquid-solid interactions, the MIT researchers were careful to address how these forces would affect the surface tension. They found that the molecules in the solid pull on the liquid molecules, effectively reducing the liquid-liquid forces that produce the surface tension. As a result, the effective surface tension decreases with height, going to zero at the contact line.

The team used their model to calculate the size of the puddle at different times, which qualitatively agreed with observations of puddle growth rates. They also found agreement between their model and data on the shape of a puddle’s vertical profile. Researchers measure the slope that a liquid surface makes as it approaches the contact line as a way to quantify the liquid-solid interaction. The model accurately predicted this contact angle and its dependence on the volume of liquid, for the case of silicone oil puddles. The researchers plan to use their model to explore more complicated fluid dynamic problems in which liquid, solid, and gas phases meet. For example, certain plans for sequestering carbon dioxide involve injecting the gas into porous underground features containing liquid water.

Jens Eggers of the University of Bristol in the UK is impressed that this model avoids the infinite viscous force problem by invoking a height-dependent surface tension. He says other researchers had tried to alter the surface tension but never in a fully workable model. “I like the idea of developing a contact line model where all the pieces come out of a coherent description,” Eggers says. 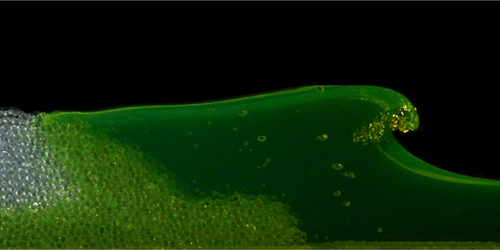