Arezki Boudaoud obtained a Ph.D. in 2001 from Université Pierre et Marie Curie, Paris. After a postdoctoral stay at MIT, he was hired as a CNRS Research scientist at Ecole Normale Supérieure, Paris. He initially worked in nonlinear and statistical physics, notably addressing pattern formation in thin solid and liquid sheets, and gradually switched to morphogenesis in living systems. He joined the Department of Biology at Ecole Normale Supérieure de Lyon in 2009. His team currently investigates the biomechanics of morphogenesis in plants and in animals, as well as the mechanisms that make the shape of organisms reproducible. 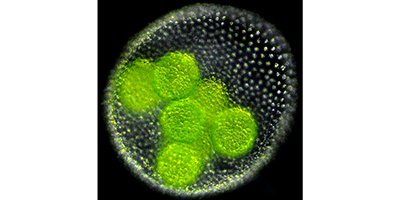 How to Turn an Embryo Inside Out

Images of an algal embryo transitioning into an adult give physicists a rare opportunity to test a mechanical model of morphogenesis. Read More »