Axel Brandenburg received his Ph.D. from the University of Helsinki in 1990. He has been a professor at Nordita, the Nordic Institute for Theoretical Physics, in Stockholm, since 2007 and a visiting faculty member at the University of Colorado at Boulder since 2015. In 2014, he was elected to the Royal Swedish Academy of Sciences. His main research interest is understanding how magnetic fields are generated from turbulent motion, a problem with applications to the Sun and stars, accretion discs, galaxies, and the early Universe. In 2001, he initiated the Pencil Code, a community project that allows researchers to simulate the dynamics of magnetized plasma. 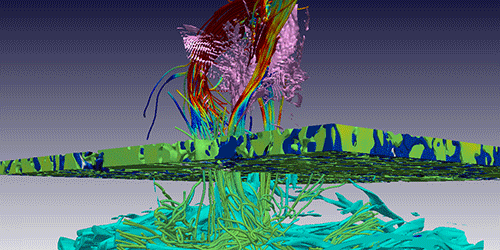 Simulations show for the first time how the magnetic fields that produce solar flares can extend out of the Sun by acquiring a twist. Read More »