Cristiano Ciuti graduated from Scuola Normale Superiore in Pisa, Italy, in 1997 and received his Ph.D. at the Swiss Federal Institute of Technology, Lausanne in 2001. He worked as a postdoc at the University of California, San Diego, and then in 2003 he became a lecturer at Ecole Normale Supérieure, Paris, France. Since 2006 he has been a professor at Université Paris Diderot, where his research group studies the theory of strongly correlated photonic (polaritonic) systems, nonequilibrium quantum fluids, and (ultra)strong coupling cavity QED with solid-state systems. His web site can be found here 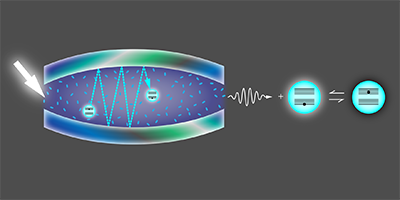 Statistical flickers in a Bose-Einstein Condensate of Photons

Experiments with photons show that the number of particles in a Bose-Einstein condensate can have strong fluctuations. Read More »