Marc J. J. Vrakking received his Ph.D. from the University of California, Berkeley, in 1992. After postdoctoral work at the National Research Council in Ottawa, and a KNAW-fellowship position at the Vrije Universiteit Amsterdam, he was a group leader at the FOM Institute for Atomic and Molecular Physics (AMOLF) in Amsterdam from 1997 to 2011. While there, he developed a research program concentrating on the development and application of attosecond laser pulses to study time-resolved electron dynamics and the interaction of atoms and molecules with intense laser fields, as well as the use of free-electron lasers for studying molecular fragmentation processes. In 2010 he was appointed Director at the Max-Born Institute in Berlin, where he now heads a research division devoted to the application of attosecond and high harmonic-based pump-probe spectroscopies to time-resolved studies of atomic, molecular, and cluster dynamics.

Illuminating molecules from within

Calculations show that with new short pulse x-ray light sources, it should be possible to use photoelectron emission to make movies of changes in molecular structure. Read More » 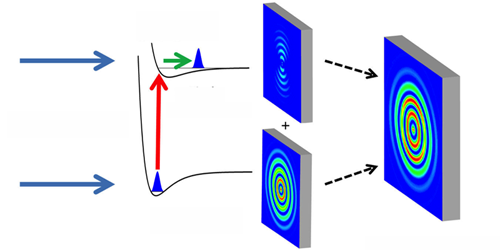