Michael Ruggenthaler received his Ph.D. jointly from the Max Planck Institute for Nuclear Physics and the University of Heidelberg, Germany. As Schrödinger Fellow of the Austrian Science Fund he worked at the University of Jyväskylä, Finland, and then established an independent research group at the University of Innsbruck, Austria. He is currently a group leader at the Theory Department of the Max Planck Institute for the Structure and Dynamics of Matter and the Center for Free-Electron Laser Science, both in Hamburg, Germany. He works on the theoretical and mathematical foundations of quantum many-body theories. His current research focus is on first-principle approaches for strongly coupled fermion-boson systems in and out of equilibrium. 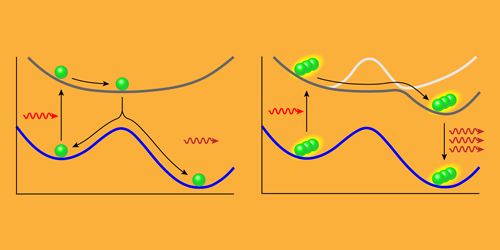 Using an optical cavity to couple several molecules can potentially set up a chemical chain reaction that requires just one photon to initiate. Read More »