August 11, 2008• Phys. Rev. Focus 22, 6
A large fraction of an antimatter beam can reflect off of a wall made of normal matter instead of annihilating. The surprising effect turns out to follow from standard, textbook physics.
×

As fans of science fiction and Dan Brown novels know, the meeting of matter and antimatter is accompanied by a destructive release of energy and the death of both particles. However, in the August Physical Review A, a team of Italian researchers reports that a good fraction of a low energy antimatter beam directed at a normal matter wall will bounce right back. The result, based on a new analysis of 12-year-old data, is surprising even to most physicists but is explained by some basic textbook principles.

The Italian group is part of the OBELIX collaboration, which took data at CERN, the European particle physics laboratory, from 1990 until 1996. The OBELIX experiment was designed to study the properties of low-energy (slow moving, 1-10 kilo-electron-volt) antiprotons and how they combine with normal matter to produce exotic atomic states. The antiprotons were directed along the axis of the OBELIX set-up, which contains at its center an aluminum cylinder 75 centimeters in length and 25 centimeters in diameter. The cylinder was filled with a small amount of hydrogen or helium gas. When one of the antiprotons met a molecule of the gas and annihilated with one of the molecule’s protons, detectors picked up the new particles produced, allowing the team to pinpoint each annihilation event in space and time.

Since 2004, an odd feature of the annihilation data had been puzzling Andrea Bianconi, of Italy’s National Institute of Nuclear Physics (INFN) and the University of Brescia, and some of his colleagues. The annihilation events clustered into two groups. The main group represented antiprotons being captured and annihilated by gas molecules as the particles traveled along the cylinder. However, they could find no explanation for a second group of annihilations, which occurred slightly later in time.

Now, Bianconi and his team report that they’ve solved the mystery by modeling the presence of the back wall of the aluminum cylinder. They’ve found that, instead of instantly annihilating when they hit the wall, about a quarter of the low energy antiprotons striking the wall reflect and travel straight back into the gas, where they later annihilate.

The key to this unusual reflection is the textbook physics known as Rutherford scattering. When a charged particle is fired at a stationary atom, the positively-charged nucleus can deflect it from its course, but only if the particle is moving relatively slowly. A fast-moving antiproton hitting a solid surface would fly right through most atoms, past their tiny nuclei, until it finally encountered a nucleus in a nearly direct hit for annihilation. But a slow-moving antiproton, as in the OBELIX experiment, is frequently deflected by the pull of each nucleus, so it bounces around like a pinball, perhaps 50 to 100 times within 5 to 10 nanometers of the wall surface. Eventually, it “forgets” the direction it was headed and has a good chance of popping back out (though it may also annihilate somewhere in the wall).

Bianconi and his colleagues explain the effect in terms of the likelihood of an antiproton getting close to a nucleus, which is 100,000 times smaller than an atom. “At the distance scale of the nuclear radius, it is fair to consider antiprotons as ‘destructive’ particles,” the team writes. However, “the probability of finding itself within such a [small] distance from the nucleus is several orders of magnitude smaller than the probability of being deflected.”

Ryugo Hayano, an expert on low-energy antimatter interactions at CERN, thinks the result, while at first surprising, is solid. “People don’t realize such obvious things until you actually encounter some phenomena and think very hard about them,” he says.

Michelangelo D’Agostino is a physicist and freelance science writer in Berkeley, California.

Experimental evidence of antiproton reflection by a solid surface

Asteroid-sized clumps of a dark matter candidate known as an axion could be detectable in a gravitational-microlensing survey. Read More »

Connecting Phases of the Strong Force 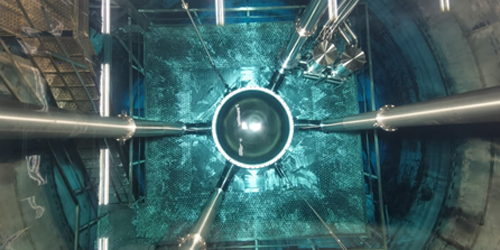 Researchers have analyzed the first data from a dark matter direct-detection experiment, searching for a form of dark matter known as fermionic dark matter via its absorption by nuclei. Read More »

Experimental evidence of antiproton reflection by a solid surface