Signs of the Quark-Gluon Plasma?

December 21, 2001• Phys. Rev. Focus 8, 34
Researchers have seen the first indicator of an exotic state of matter but can’t yet confirm its presence.
×

Researchers have seen the first clear indicator of conventional matter dissolving into free-roaming quarks and gluons, but they will need to see several other signs before they can be sure. The scientists collided pairs of gold nuclei at high energies and observed the particles that sprayed from the impact point. They detected fewer particles from the collisions than standard theory predicts, suggesting that a tiny blob of unbound quarks and gluons may have been created. By combining this finding, reported in the 14 January print issue of PRL, with many to come in the next few years, researchers may be able to understand a state of matter that hasn’t existed since the dawn of the Universe.

Quarks create everyday particles like protons by sticking together in packets of two’s and three’s, but there’s no reason they can’t form larger associations. In theory, very hot, dense matter can dissolve into a mass of loosely associated quarks and gluons known as a quark-gluon plasma, or QGP, where particles would behave differently than they do in normal nuclei. Researchers have been interested in studying QGPs because they could resemble the infant Universe, before protons and neutrons came into existence. But until recently, particle accelerators have been unable to propel nuclei strongly enough to create this exotic form of matter.

Now nuclear physicists at the Relativistic Heavy Ion Collider (RHIC) at Brookhaven National Laboratory in Upton, NY, have achieved the necessary conditions and seen matter that might be a QGP. Researchers smashed gold nuclei together at energies of 130 GeV–creating matter with a density one hundred times greater than a normal nucleus. They then used the gigantic PHENIX detector to record virtually every type of particle expelled at a right angle from the collision. After analyzing their data, the team found significantly fewer particles than conventional theory predicts.

“This is one of the first of many indicators required to establish the presence of a QGP,” says William Zajc, spokesperson for the PHENIX collaboration. In the dense plasma environment, Zajc explains, a fast-moving quark goes through frequent interactions with other quarks and gluons, which can sap its energy. Because the quarks must undergo many interactions to come out at a right angle from the collision axis, most lose all their energy before they can form new particles along that direction.

These results are the best yet, but it’s too early to tell whether researchers have created a QGP, cautions Berndt Mueller of Duke University. “To be frank I think this is still a long way from such an identification.” But Mueller believes that future experiments will be able to identify and eventually study QGPs. RHIC’s extensive system of multiple detectors will allow researchers to paint a broad picture of what’s happening in these high-energy collisions, he says. “This at the moment is a small glimpse at the whole landscape.”

Suppression of Hadrons with Large Transverse Momentum in Central Collisions at

Are the excess events detected by the XENON1T experiment a harbinger of new physics or a mundane background? Read More » 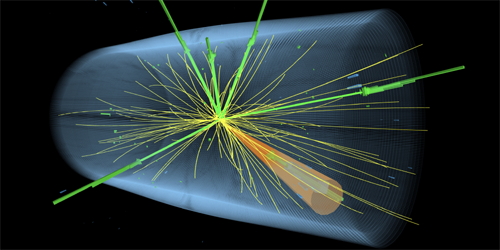 Suppression of Hadrons with Large Transverse Momentum in Central Collisions at