Golfing with a Single Photon

August 1, 2001• Phys. Rev. Focus 8, 7
The probability of finding a photon in a narrow range of both position and momentum simultaneously appears to be negative, thanks to the uncertainty principle.
×

Where quantum mysteries are concerned, Schrödinger’s cat has nothing on a single photon–at least you’d have some chance of finding the feline, whether dead or alive. In contrast, if you looked for a photon in a small space, within a limited range of momentum, you’d seem to have a negative chance of finding it. This strange result shows up in measurements appearing in the 30 July print issue of PRL and is rooted in Heisenberg’s uncertainty principle, which limits how precisely you can simultaneously measure an object’s position and momentum.

Light is both a particle and a wave. It’s not hard to define the terms “position” and “momentum” for light particles (photons), but these quantities must be defined in a more abstract sense for light waves. Either definition can be represented in quantum phase space, which looks something like a hilly golf course. North-south coordinates mark the photon’s position, while east-west coordinates give momentum. The height of the land at each point is much like the probability of finding a photon there. But in the quantum world, where a photon’s position and momentum cannot be determined simultaneously, this “elevation” can only be understood as an approximation to probability. The new experiments by Alex Lvovsky and his colleagues at the University of Konstanz in Germany show that the photon’s phase space contains a circular ridge, where the photon is likely to be found, and a deep crater in the center, where your chances of finding the photon seem to be negative.

Probability can’t be negative, but the photon’s quantum phase space can contain negative valleys because Heisenberg’s uncertainty principle won’t allow you to squeeze the photon into such a narrow range. If you draw a stripe across the golf course–representing a narrow range of positions–and try to putt the photon onto it, the photon immediately smears out along the length of the line. So instead of measuring the negative valleys directly, Lvovsky’s team did the equivalent of walking around the edges of the course and measuring average elevations along lines drawn in many different directions.

To accomplish that feat, Lvovsky and his colleagues created pairs of photons sharing the same quantum state. They measured the wave-like behavior of one light beam and the particle-like behavior of the other–essentially accessing the same photon state with two different beams. The researchers used the first beam as a compass: By measuring the (random) phase of the wave in the beam, they could draw stripes across the golf course in different directions. To get the average height along each stripe orientation, they counted the number of times a photon was detected from the other beam coincident with a given phase in the first beam. Lvovsky says this was the first experiment to measure both the wave and particle nature of a single photon simultaneously.

This mapping technique was developed by Michael Raymer at the University of Oregon. For Raymer, the experiment was impressive because it produced single photons in well defined wave packets. While the experiment is “a real step forward” for his game of physics, says Raymer, it also suggests that if miniature golf ever goes quantum, we’re going to have a hard time finding the ball.

Rebecca Slayton is a freelance science writer in Cambridge, MA. 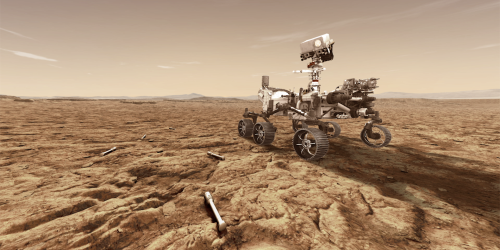 A Rockin’ Time for Space Missions

2021 may be the year of the space rock, with scientists combing through new (and old) samples from the Moon and asteroids, while plans for a pick-and-collect mission to Mars get under way. Read More »

A study of long-range interactions in disordered systems yields a surprising result: Transport can increase with disorder. Read More »

Optics Bench on a Graphene Flake

A nanoscale, graphene-based device takes advantage of the wave nature of electrons and provides a level of control that will be useful for quantum computers. Read More »