March 15, 2019• Physics 12, 29
A thunderstorm probed with atmospheric muons had an electric potential exceeding one billion volts, much higher than values measured previously.
×

Researchers have documented a thunderstorm producing an electric potential of about 1.3 billion volts (GV), 10 times greater than the largest value ever reported. The team’s new thunderstorm monitoring method makes use of the muons raining down on Earth, produced by cosmic rays hitting the atmosphere. A thundercloud’s potential can reduce the energies of the charged particles and decrease the likelihood that they will be detected beneath the storm. The new measurement indicates that thunderstorms with several-billion-volt potentials are possible, voltages high enough to explain the mysterious flashes of high-energy gamma rays sometimes observed during thunderstorms.

Since Benjamin Franklin flew a kite on a stormy afternoon in 1752, we have known that thunderstorms include electrical phenomena—lightning and thunder are the manifestations of sudden discharges between charged regions of the atmosphere. To study the electrical structure of thunderclouds, researchers send airplanes or balloons into the centers of thunderstorms. These tests have found electric potentials exceeding tens of millions of volts, with the largest value, 130 megavolts, seen during a mountain storm in New Mexico in the 1990s [1]. Aircraft and balloons, however, can only probe the small region of the storm through which they fly and cannot measure the potential across the entire cloud.

The method devised by Sunil Gupta of the Tata Institute of Fundamental Research in Mumbai, India, and colleagues is based on probing the effect of thunderstorms on particle detections by G3MT, a muon telescope in Southern India (part of the GRAPES-3 cosmic-ray detection facility). The telescope detects muons generated in the atmosphere by cosmic rays—charged particles that mainly come from outside of the Solar System. Researchers at several other muon telescopes have previously observed thunderstorms correlated with changes in the measured numbers of muons (the flux). Now Gupta’s team has taken the next step and developed a quantitative method. “We realized that GRAPES-3 is an ideal tool for measuring thunderstorm potentials, in particular for the biggest storms,” says Gupta.

The majority of the muons detected by G3MT are positively charged antimuons, which usually lose energy as they respond to the complicated arrangement of charges of a thundercloud. With reduced energies, the muons are less likely to be picked up by the detector, which only measures particles with energies above a certain threshold. So the storm registers as a reduction in detected muon flux that can be as large as a couple of percent. With over one million muons reaching G3MT every minute, the system can measure muon-flux changes with 0.1% precision. The telescope can also distinguish among 169 discrete directions in the sky.

From flux measurements, Gupta and his colleagues can estimate the thunderstorm potential using computer simulations based on a simplified description of the thunderstorm. They treat it as a giant capacitor made of two parallel plates 2 km apart generating an upward-pointing electric field.

Between 2011 and 2014, the researchers gathered data on 184 thunderstorms, shortlisting the seven largest events. Six of those, however, had a complex temporal profile, which made it hard to compute the potential. The researchers focused on the seventh storm, which occurred on 1 December 2014, and derived a peak, record-breaking electric potential of 1.3 GV.

“This muon-based technique provides a unique, albeit indirect, way to probe the electric fields in the largest natural particle accelerators on Earth—lightning and thunderstorms,” says Michael Cherry, who studies high-energy cosmic rays and gamma rays at Louisiana State University in Baton Rouge. The analysis depends on Monte Carlo simulations and on simplifying assumptions that may not apply to all storms, he says, but the value derived clearly indicates much larger potentials than those previously measured by balloons. He suggests that launching a balloon or a drone during a thunderstorm while observing muons could provide a test of one key model parameter: the 2-km separation distance between the plates of the thundercloud-equivalent capacitor.

The new finding may also help researchers solve an atmospheric puzzle, says Gupta. Since 1994, satellite measurements have revealed gamma-ray flashes coming from altitudes of tens of kilometers. Researchers speculate that these flashes could be produced by electrons accelerated by thunderstorms, but previous measurements hadn’t found sufficiently large thunderstorm potentials. However, the newly observed potentials in the gigavolt range are much closer to the values required to produce the observed gamma rays. Gupta’s team is now setting up gamma-ray detectors around GRAPES-3, hoping to provide conclusive evidence by catching gamma-ray flashes in coincidence with a gigavolt-level thunderstorm.

Matteo Rini is the Editor of Physics Magazine. 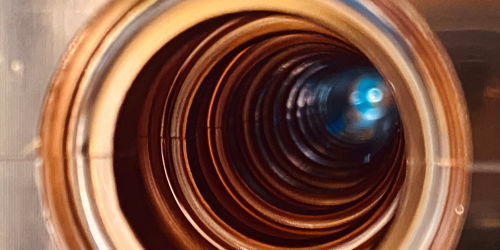 For the Love of Neutrinos

An analysis of 12 years of gamma-ray observations has allowed researchers to pinpoint a Galactic source of high-energy cosmic rays. Read More »