May 28, 2019• Physics 12, 60
An experimental seminar coopted paintings, poetry, and hip-hop music to teach physics to undergraduate students, who created art projects from the concepts that they learned.
×

The idea to teach physics through art had been brewing in Ágnes Mócsy's mind for years. Mócsy, a theoretical physicist, had just started a visiting professorship at Yale University in New Haven. On the hook to teach, she expected to take the reins of a class on nuclear physics, her specialty. But a flyer from the university’s museums and libraries triggered her to consider a new possibility: Why not teach physics using Yale’s famous art collection? Receiving the green light last fall, she took a class of 15 first-year students on an art-filled journey through the cosmic landscape, the particle zoo, and quantum weirdness.

Mócsy’s experimental seminar came to a celebratory finish on May 7th when her students presented their final projects in a public show at the Yale University Art Gallery—a first for any physics class. “It’s trippy that we’re here,” she said as visitors trickled in to see the show. For 40% of their grade, the students had been asked to complete a “fusion project,” in which they researched a physics concept and conveyed it through a creative medium of their choice.

Students Kyle Mazer and Sebastian Roizner Rodriguez opened a series of performance pieces with a synthed-up version of Frank Sinatra’s 1964 hit Fly Me to the Moon. Roizner Rodriguez sang the tune over a baseline and drumbeat that Mazer created using plasma and electromagnetic waves collected by NASA.

Later, a small group ducked outside to see Kijana Richmond’s The Duality of Perception. Depending on your viewing angle, this sculpture of colorful balls looks like the circular outline of a particle or the undulating pattern of a wave, explained fellow student Kennedy Bennett, who was wearing her final project—a T-shirt embroidered with the equations for time dilation and length contraction.

Fusing physics and art in this way is a familiar venture for Mócsy. As a professor at the Pratt Institute in Brooklyn, she teaches physics and astronomy to artists, designers, and architects—relying on art-based materials to get concepts across. A fashion enthusiast with bubble-gum pink streaks in her hair, she makes physics look stylish. She has even directed a film.

But the Yale course was an opportunity to explore the art-physics connection with students who were neither trained scientists nor artists. It was also more personal, because she could fold in beloved pieces from Yale’s gallery and call on poets, sculptors, and musicians who not only incorporate physics into their work but also stand up for another of Mocsy’s passions: social justice.

In one lesson, Mócsy gathered students around American artist Joseph Stella’s futurist painting Brooklyn Bridge to talk about how physicists interpret color. The bold reds and blues in the piece served as a springboard to introduce the red- and blue-shifting of light and the way color represents degrees of heat.

Another discussion centered on the different depictions of empty space in Western and Eastern art. In the West, artists have traditionally seen empty space as “nothing” and avoided it by covering every millimeter of the canvas with paint. But Eastern artists view space as having “potential and growth,” Mócsy said. She connected this notion to the realization that the vacuum is “something” because it’s teaming with energy and virtual particles.

To go beyond static paintings on a wall, Mócsy set up a virtual Q&A with London-based hip-hop artist Consensus, who integrates particle physics themes into his music to bring attention to the under representation of minorities in STEM fields. Students also heard from Tim Otto Roth, who creates giant installations inspired by physics experiments, and they discussed poetry with Nobel-Prize-winning chemist Roald Hoffmann, who has authored several poetry collections.

Most of the students I spoke with aren’t planning to major in physics, and several admitted that they chose the seminar to fulfill Yale’s breadth requirement. But the class served a wider purpose than enticing students to physics careers. Mócsy wanted to convey how physicists know what they know. “How we understand things is a process—I think [society] needs to understand that in a more detailed way than it actually does,” she said.

Karsten Heeger, who is the director of Yale’s Wright Laboratory for fundamental physics, is impressed with what the students picked up. After a guest lecturer spoke about neutrino physics, he noticed the students were asking about some truly deep aspects of the topic. Heeger saw this as a sign that “if you put people in the right context, they can ask really fundamental questions.”

Back at the gallery, the lights went off for a few film screenings. Sam Gallen’s experimental film The Void managed to pack in the Voyager mission, dark matter, and relativity—think David Lynch meets Neil deGrasse Tyson.

As the show came to an end, people milled around the paintings and pottery that lined the room. Maya Boateng, who is contemplating a degree in computing and the arts, had learned that all the elements in the Universe come from stars. Her final project skI used thousands of tiny photos of planets and stars to create the portrait of a woman’s face. Boateng sees poetry in the idea that we are all stardust. “I think it’s so romantic,” she said.

Correction (6 June 2019): The article was revised to provide the names of people pictured in the photos. 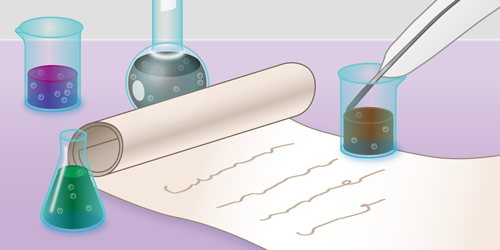 Stuck with how to present your latest scientific project? Try a poem. Read More »

Plant-based plastics offer a sustainable alternative to traditional petrochemical plastics. Physicists and engineers are making the shift easier by fine-tuning the structure and function of these biomaterials while also developing better processing techniques. Read More »