January 18, 2023• Physics 16, s11
Interactions with cosmic rays could make low-mass dark matter particles detectable by neutrino observatories. But an analysis of two decades’ worth of data shows no signs of the particles.
×

In the hunt for dark matter, most of the easiest-to-search-for particle masses have already been ruled out. Still empty-handed, physicists are extending their searches to the lighter end of the possible mass range: below 1 GeV. As part of that effort, the team behind the Super-Kamiokande experiment in Japan have now analyzed more than two decades’ worth of data to constrain the properties of dark matter particles with masses between 1 and 300 MeV [1].

Super-Kamiokande consists of a 50,000-tonne tank of water buried in a disused mine. The experiment was designed to measure neutrinos by detecting their rare interactions with electrons or nucleons in the water. These interactions can produce secondary particles that travel faster than the speed of light in water and generate flashes of so-called Cherenkov radiation that can be detected by sensors lining the water tank. Such flashes are also predicted to appear when incoming dark matter particles collide with—and thereby accelerate—hydrogen nuclei in the water. But for that to happen, the lightweight dark matter particles have to be traveling unusually fast, which requires a “boost” from collisions with hadronic cosmic rays.

Using data collected between 1996 and 2018, the team searched for such events by analyzing the Cherenkov signal from particles coming from the direction of the Milky Way’s center, where dark matter is thought to be densest. Finding nothing beyond the expected neutrino signature, the researchers established the strongest constraints yet on the interaction cross section of this cosmic-ray-boosted, lightweight dark matter with hydrogen.

New observations of a stellar nursery highlight a self-regulation mechanism that appears to resolve discrepancies between simulated and observed efficiencies of star formation. Read More »

The first measurements from a newly built gamma-ray observatory have been analyzed for signs of the decay of heavy dark matter, putting a lower limit on the hypothetical particles’ lifetime. Read More » 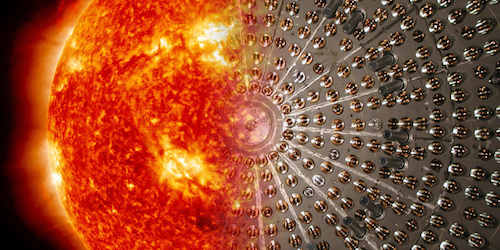