Why Red Paint Darkens over the Centuries

November 15, 2013• Physics 6, 124
Experiments and calculations reveal the chemical reactions that cause the brilliant red in ancient paintings to turn dark over time, as well as potential preservation measures.
×

For many centuries mercury sulfide was the painter’s finest red pigment, but in some old paintings it has now darkened to a blackish color. The explanation has been controversial, but a research team using a combination of x-ray spectroscopy and first-principles calculations now claims to have discovered the photochemical processes responsible, as they report in Physical Review Letters. They say that the findings might help to clarify the optimal conditions for protecting paintings.

Mercury sulfide, in the artificial form called vermilion or in its natural mineral form cinnabar, has been used in art since ancient times, from the wall murals at Pompeii to works by the Renaissance and Baroque old masters such as Titian and Rubens. But its tendency to blacken over time was known even to the ancient Romans.

Studies in the 1980s seemed to suggest that this discoloration was due to a light-induced transformation of mercury sulfide from a red to a black form, but more recent investigations have implied that the process is more complex [1] and that the black particles seen under a microscope might instead be metallic mercury [2]. The overall appearance can be greyish because salt in the environment also reacts to form white mercury chloride [3].

However, it has been hard to prove the presence of metallic mercury in these samples because this metal is liquid and so doesn’t show up with the standard analysis techniques, which focus on crystalline solids. And the sequence of reactions responsible for these putative substances hasn’t been clear.

Fabiana Da Pieve of the Free University of Brussels, Conor Hogan of the Institute for the Structure of Matter in Rome, and their co-workers have now examined these questions by combining x-ray diffraction measurements with calculations of light-induced reactions of mercury sulfide. They studied a discolored vermilion paint layer from a mural in a th century Spanish monastery. Their diffraction experiments showed that the paint film contained not just the white mercury chloride, but also a yellowish compound of mercury, chlorine, and sulfur, called corderoite, and two other related crystalline forms of that mineral. These appeared at different depths in the layer, with unaltered vermilion at the bottom.

None of these compounds is grey or black, so the team thought that metallic mercury might be present, although it’s invisible to x-ray diffraction. To unravel the possible chemical reactions, they performed first-principles calculations, which had not been applied to this problem before. They calculated the energy electrons would require to convert a mercury ion in mercury sulfide to a neutral atom of mercury metal. The energy was higher than that of electrons made available by light hitting the surface, so direct conversion to the metal wasn’t possible.

Instead, the researchers propose a different sequence of events. First, salt in the surroundings provides chloride ions to convert vermilion to corderoite. Then, exposure to air allows the crystalline structure of corderoite to develop defects, such as locations where a sulfur atom is missing (carried away by reacting with oxygen). The team calculated that these defects provide the right conditions for light to convert mercury ions into metallic mercury. The mercury would collect on the surface in the form of small liquid droplets, which appear black. Da Pieve and her colleagues also found a second chemical pathway that allows light to produce the metal via mercury chloride. The team is currently working to experimentally prove the presence of metallic mercury.

“This is a valuable piece in the jigsaw,” says Marika Spring, a conservator at the National Gallery in London, who has previously studied the darkening of vermilion. “It shows that the degradation is an ongoing, step-by-step process.”

According to the new scheme, the discoloration depends on exposure to chloride salt, which is a common component of dirt, especially in outdoor archaeological sites, and which is easily accumulated on a paint surface in humid conditions. So an obvious precaution would be to protect paintings from such contaminants. Da Pieve says that in general, conservators need to control humidity, for example by ensuring that paintings are not hung on external walls. They should also use lighting with wavelengths longer than those responsible for the photochemical transformation of mercury, she says.

Casting Light on the Darkening of Colors in Historical Paintings

Tightening a Bond with a Voltage

A scheme that uses a voltage to control a chemical bond’s strength allows the tip of an atomic force microscope to pluck a graphene sheet from a substrate.   Read More »

Hydrogen-burning flames can propagate in surprisingly narrow spaces and with little fuel by breaking up into fractal patterns. Read More » 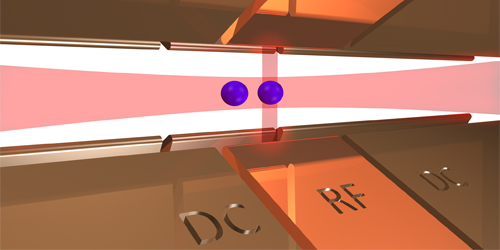 A quantum simulator made of two trapped-ion qubits can model quantum effects occurring during energy-transfer processes in molecules. Read More »

Casting Light on the Darkening of Colors in Historical Paintings