February 22, 2013• Physics 6, 21
A new technique allows improved acoustic imaging of oil deposits and other underground structures and may also work for medical imaging.
×

A new algorithm will allow a cleaner view of subterranean structures using sound waves. A team that previously proposed an imaging technique for an idealized arrangement of geological layers now presents a generalized theory that would be practical for almost any situation. Their technique should allow improved imaging of underground water reservoirs, plumes in the earth’s mantle, or even non-geological systems, such as the innards of airplane wings or human bodies.

To image an underground structure such as an oil or gas deposit, geophysicists can use acoustic waves produced by one or more seismic trucks, vehicles that generate strong vibrations that propagate kilometers into the ground. Instruments underground or at the surface detect the reflections from these waves, allowing researchers to construct an image—essentially a subterranean sonogram.

But the ideal acoustic source would be much closer to the underground structure, just as a flashlight works better up close to an object than from far away. So researchers have developed so-called virtual sources, a technique for reorganizing the reflection data to make it seem as though there is a single, strong acoustic source kilometers below ground, near the structure under study. And the virtual source can be easily moved to different locations—in effect, shining a flashlight all around the layers of earth, getting a close look at the nooks and crannies. The mathematical description of virtual sources includes the concept of time-reversal, where the waves that travel down to a location in the ground can be seen as being emitted from that spot instead.

The technique often requires detectors to be placed deep underground, near the virtual source. Alternatively, the detectors can be at the surface, but then the analysis requires assumptions about the region between the surface and the object of interest, such as the speed of sound. Either way, the challenge is identifying multiple reflections—when waves bounce up and down between geological layers before detection, rather than reflecting just once off the structures of interest. When researchers make assumptions about the underground acoustic properties, “the accuracy quickly degrades when the virtual source is placed deeper and deeper,” says Kees Wapenaar of Delft University of Technology in the Netherlands. And digging a hole for detectors is often inconvenient or unrealistic.

In a previous paper, Wapenaar and his colleagues developed the theory for a virtual source technique that required no assumptions about the geology and no underground detectors [1]. Instead, their technique can gain enough information directly from the acoustic reflection data to account for multiple reflections. But this theory wasn’t practical because it assumed precisely three geological layers, each with a fixed thickness and shape. It also assumed that several parameters, such as the speed of sound, were identical everywhere within a layer.

Now the team presents a general derivation of their method, which works on an arbitrary number of layers, made of any material, and with interfaces of any shape. As a test, the researchers performed a computer simulation for a specific D case with eight geological layers having a variety of sound speeds and various hills and valleys at their interfaces. With the virtual source producing a single sound pulse from the middle of the third layer, they generated the acoustic signals that would be observed by a line of detectors at the surface. The team found that the simulated signals agreed to a high degree of accuracy with those predicted by the theory and allowed them to correctly pick out the delayed pulses that resulted from extra reflections.

Kasper van Wijk of the University of Aukland in New Zealand sees the paper as a stepping stone in the important trend of imaging with virtual sources. He thinks that it might lead to more complete images of the earth’s subsurface or to clearer ultrasound images of the human body. “Sometimes other organs, bones, obstruct the view from one side or another,” so the virtual source technique may be useful.

Shannon Palus is a freelance science writer and a student at McGill University in Montreal. 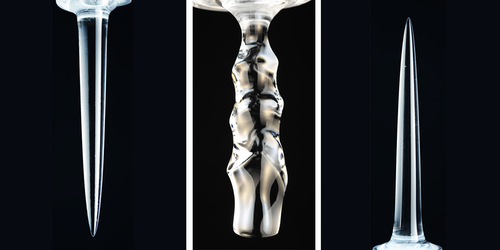