Where the Rubber Meets the Road

A new technique reveals microscopic details of the interface between two surfaces that are in contact. It uses high frequency sound or pulses of heat to probe the interface, which is inaccessible to conventional microscopes. The technique, reported in the December Physical Review B, could be a valuable tool for polymer scientists and biologists alike.

The interface between two seemingly smooth surfaces, such as an egg resting on a countertop, is actually a world of caverns and columns, stalactites and stalagmites, at the nanoscale. Researchers studying how a tire grips the road or how a cell hangs onto a surface want to explore this complex landscape in detail. But there is currently no way to do so while the two objects are in contact. Instead, researchers usually press one object into the other, remove it, and then image the indentation it leaves using an atomic force microscope.

Now a team led by Oliver Wright of Hokkaido University in Sapporo, Japan, has seen the details of a live contact. In their setup, a mechanical arm presses a ceramic ball, a few millimeters in diameter, down onto a 110-nanometer-thick film of chromium coating a sapphire surface. From below, a laser fires a 200-femtosecond pulse up into the sapphire, focused on a 2-micron-wide spot at the boundary of the sapphire and chromium. This “pump” pulse heats the material, which makes it expand suddenly and send a short ripple of high-frequency sound (up to 100 GHz) upward, toward the sphere. The sound bounces off the chromium-sphere interface, returns to the sapphire-chromium interface, and is then probed by a second laser pulse. This “probe” pulse reflects back to a detector, and the intensity of this reflection is a measure of the strength of the acoustic echo, thanks to a phenomenon called the photoelastic effect.

By taking pump-probe readings on the same spot, but changing the probe delay each time, the researchers created a complete time profile of the 10-picosecond-long echo from the sphere-chromium interface at a single point. Measuring the strength of the echo from each point along a line showed that the echo varied somewhat erratically at the micron scale. The team says these fluctuations came from the nanoscale roughness of the contact, the tiny caverns and columns. When the sound wave hits a region largely in contact with the sphere above, much of it leaks through, whereas a region with more empty space will reflect more sound energy downward.

The team showed that as they increased the pressure on the sphere, the sound reflection strength went down because more microscopic spaces became filled in. But the reduction was more dramatic than theory could explain, perhaps because of complicated acoustic effects within the columns. They also used the timing of the acoustic echo at each location to measure the distance the waves travelled, to nanometer precision, which led to a detailed measurement of the shape of the chromium surface deformation, or “indentation,” caused by the sphere’s pressure. With maximum force on the sphere of 4.2 newtons, the team estimated the average diameter of the contact “columns” to be 120 nanometers and their density at the interface to be 10 per square micron.

Wright and his colleagues also demonstrated that measuring the thermal response of the sapphire to the pump heating at each point provides an independent, two-dimensional view of the interface contact. Chromium heated by the pump pulse cools more rapidly in regions with more contact with the sphere above, and the temperature affects how well it reflects the probe pulse. The team’s thermal map shows a dark disk where the ball and film were in contact, speckled with lighter spots where there were air gaps.

Wright says the team’s method could be used to study friction and wear between surfaces, cell adhesion, or, for the thermal method, heat dissipation in integrated circuits. The techniques are “new and interesting,” says Kevin Kendall, a chemical engineer at the University of Birmingham, England. “It may be a specialized method at present, but I think that there will be applications of this in the wider field.”

Lauren Schenkman is a science writing intern at the American Physical Society.

A novel method for measuring nanoparticle size could have applications in industry and basic materials science research. Read More » 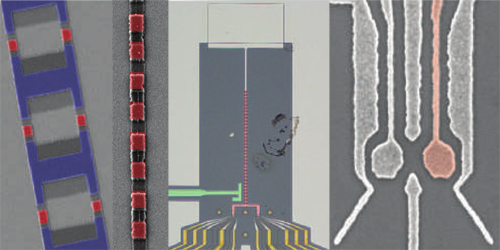