Synopsis: Mimicking the Brain with Superconductors and LEDs

March 23, 2017
A proposed computer made of superconductors communicating via light could carry out more operations than a human brain while using less energy.

The human brain is a highly efficient processor, using less energy than a light bulb to perform quadrillions of operations. The world’s fastest supercomputer, Sunway TaihuLight in China, performs a few times more calculations every second than a brain but consumes about 800,000 times more energy. Scientists from the National Institute of Standards and Technology, Colorado, have proposed a new computing system—superconductor devices communicating using light—that mimics the brain’s neural architecture. The team’s calculations suggest their system could operate on less energy and perform more calculations than a human brain.

In most computers, each semiconductor component interacts with just a few others. But if, as in the brain, each component needs to be linked to thousands of others, the circuit’s architecture quickly becomes chaotic. Jeffrey Shainline and colleagues suggest that instead of electrons, photons could act as the information carriers, eliminating this problem—photons allow multiple elements to communicate with each other without the need for wired connections.

The team’s artificial neuron consists of a superconducting wire connected to a LED. The two elements act as the signal detector and the signal sender, respectively. In the absence of incoming photons, the LED is off and the neuron is inactive. When the superconductor absorbs photons, its temperature increases, triggering a transition from a superconducting to a metallic phase. This alters the current flow in the LED, switching it on and making the neuron active. Since the transition requires the absorption of multiple photons, the circuit can mimic real neurons, which “fire” only if the incoming signal is above some threshold. Branched waveguides then funnel the emitted photons to thousands of other superconducting neurons. According to the team’s calculations, such a system could perform 10 times more operations than the human brain and require just 20 W of energy.

Traveling with a Quantum Salesman

Superfluid Storm at a Surface

Mixing a trace of an additional element into a material used in electronics could dramatically improve the material’s properties. Read More » 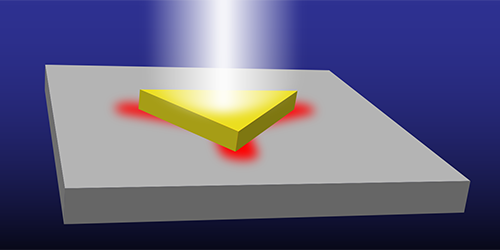