February 27, 2018
Researchers use a cavity-coupled double quantum dot to study electron-phonon interactions in a nanowire.

The team’s device resembles a tiny bridge. The DQD—a 50-nm-thick wire—is suspended between two pedestals, a design that makes the DQD sensitive to 60-eV phonons. One end of the bridge is connected to a nearby microwave cavity, and a sinusoidal electromagnetic wave is applied to the cavity to fill it with photons. Electrons tunneling from one end of the bridge to the other cause the wire to vibrate, creating phonons; the electrons also emit photons into the cavity. Detection of electron-phonon interaction is made by tracking the wire’s current as it vibrates and by monitoring the cavity photons.

In a proof-of-principle demonstration of the device, Hartke and his co-workers varied the potential across the bridge and measured changes in the wire’s current and in the amplitude and phase of the cavity photons. They observed well-defined oscillations in all three variables as the potential changed, with peaks appearing as the energy within the DQD passed through multiples of 60 eV, a sign that phonons were emitted. The team also found that photons emitted by the tunneling electrons altered the natural frequency of the cavity, a critical insight for interpreting future experiments. 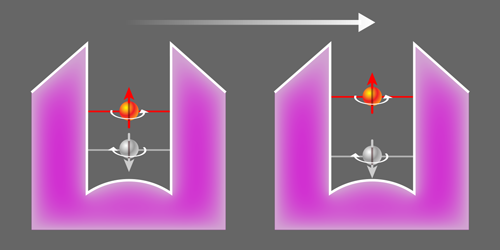