July 31, 2009• Phys. Rev. Focus 24, 5
Chains of spheres representing polymers can arrange themselves into a crystal, which turns out to be the highest entropy structure, according to computer simulations.
×

Other things being equal, nature favors more randomness, but sometimes an orderly pattern lets a system increase its total disorder. In the 24 July Physical Review Letters, Spanish researchers show that a large group of spheres favors a crystalline arrangement over a disorderly arrangement, even when the spheres are linked into polymer-like chains. Although their computer simulation is idealized, the researchers believe it provides lessons for real polymers and other large molecules, including proteins.

Individual particles such as atoms often arrange into a crystal because their mutual attraction lowers their total energy. In contrast, randomness, or entropy, usually favors a disordered arrangement, like that of molecules in a liquid. But researchers long ago found, in simulations and experiments, that spheres without any attraction also crystallize when they are packed densely enough. This entropy-driven crystallization occurs because the crystal leaves each sphere with some space to rattle around. In contrast, a random arrangement becomes “jammed” into a rigid network of spheres in contact with their neighbors. The entropy of the few “rattlers” that are still free to move can’t make up for the rigidity of the rest of the spheres.

But many researchers thought that connecting the spheres like beads on a string to simulate polymers would restrict their motion so much that the extra wiggle room in the crystal wouldn’t help; random arrangements would prevail. To test this idea, Manuel Laso and his team at the Technical University of Madrid simulated an idealized model in which spheres in the same chain must stay in contact but can otherwise move freely. With no resistance to bending or twisting at these connection points, and no other inter-sphere forces, the simulation was similar to the case of uncharged single spheres, in that any transition to a crystal was entirely entropy-driven.

One practical challenge was that densely packed chains become entangled and take an impractically long time to rearrange into a crystal, even if that structure is preferred. To speed things up, the researchers allowed the spheres in their simulation to swap from one chain to another. Although this is “not true dynamics,” says team member Nikos Karayiannis, “we are able to sample configuration space orders of magnitude faster.”

The simulations showed that the individual spheres form a crystalline arrangement, as unconnected spheres do, although the chains do not form any regular pattern. Karayiannis says the crystallization of polymers occurs for the same reasons as it does with unconnected spheres. “It shows that it is possible” for entropy to drive the crystallization, he says, although more realistic models of polymers would also include the influence of forces such as the mutual attraction of spheres and the resistance to bond bending and twisting. Karayiannis says that in addition to improving the understanding of polymer crystallization, the results may also relate to protein molecules, which are biological polymers. The relevance for proteins is not for crystallization, but for the natural folding of a protein into a three-dimensional structure, where the interactions among parts of the molecule are analogous to those among crystallizing polymers.

Seeing entropy-driven crystallization in a polymer is “an unexpected result,” says Thomas Truskett of the University of Texas at Austin, since the “initial intuition would be that [links between spheres] would frustrate the rattle” of any loose spheres. Although the connection to more realistic polymer models is somewhat unclear, Truskett says that “good fundamental work like this does advance the field, even if we don’t know how to apply it right away.” 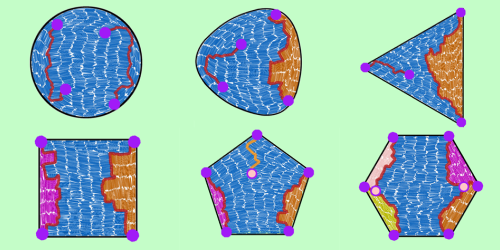 Topology Inside a Liquid Crystal

The orientation boundaries in a liquid crystal can be characterized by a topological charge that always sums to one, no matter the shape of the container.   Read More »