August 15, 2017
A single-electron transistor carries more heat than that predicted by the Wiedemann-Franz law linking thermal and electrical conductivities.

Good conductors of heat are usually also good conductors of electricity. That’s according to the Wiedemann-Franz law, which states that at a given temperature, the thermal conductivity of a metal is proportional to its electrical conductivity. But researchers have found that the law doesn’t hold for certain materials, such as metallic vanadium dioxide. Bivas Dutta from Grenoble Alpes University in France, Joonas Peltonen from Aalto University in Finland, and colleagues now demonstrate that single-electron transistors also violate the law. These transistors form the basis of nanoscale electronic circuitry, so the finding might be useful for managing and harvesting the heat generated in such circuitry.

A single-electron transistor is made up of a nanoscale “island” of conducting material connected to two electrodes (source and drain) through tunnel barriers and to a third electrode (gate) through a capacitor. The team measured the charge and heat conductances of the device as a function of the average number of electrons () induced on the island by a voltage applied to the gate. They found that the ratio of conductances obeyed the Wiedemann-Franz law only in the transistor’s states corresponding to half-integer values of . In other states, including states with an integer value of , the ratio was up to 4 times higher than that predicted by the law. The results are in agreement with a previous study that predicted a violation of the law for non-half-integer states of this type of transistor and linked it to an increased efficiency of Coulomb blockade—a phenomenon in which the electrical conductivity decreases because of Coulomb repulsion between electrons.

Thermal Conductance of a Single-Electron Transistor

Filling in a Tetraquark’s Profile 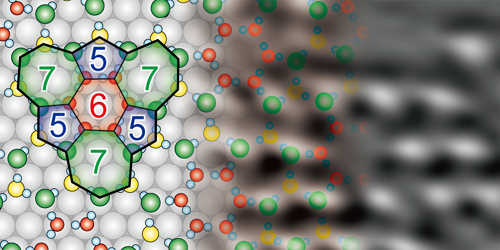 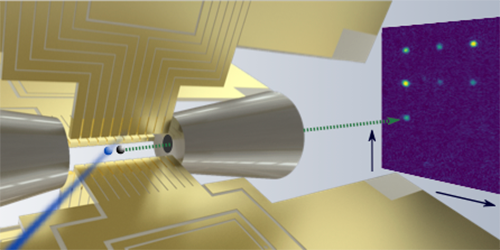 A new technique inserts single-ion impurities into a crystal reliably and with a precision of tens of nanometers. Read More »

Thermal Conductance of a Single-Electron Transistor