October 31, 2018
A proposed method for transporting spin from one place to another utilizes superconducting vortices as carriers of spin information.

The spintronic vision of the future is one where information is encoded in the spins of electrons or other particles. But a major hurdle preventing the realization of this vision is the fact that spins don’t travel very well: they lose the information they encode through scattering after moving as little as a few nanometers through a material. A new proposal for spin transport could overcome this problem by transferring information from spins to more robust superconductor vortices.

Vortices are small regions in a superconductor where the current flows around in a circle. These so-called topological defects, which form by thermal fluctuations and also by exposure to a magnetic field, are typically considered a nuisance, as they introduce resistance when they move through the superconductor. However, Se Kwon Kim from the University of Missouri, Columbia, and colleagues have a plan to resuscitate the reputation of vortices by using them as information couriers.

To show the viability of vortex-mediated spin transport, the team developed a model for converting spins to vortices and vice versa. They considered a system in which a superconducting slab is sandwiched on two sides by magnetic insulators. Their calculations show, for example, that if the left-side insulator encodes information in the form of spins pointing up, then those spins generate a counterclockwise-rotating vortex in the superconductor through the inverse spin Hall effect. The vortex, which is insensitive to scattering effects because of its topological character, then diffuses across the superconductor. If the vortex reaches the right-side insulator before running into one of the other boundaries, then the information it contains converts back into upward-pointing spins by means of the spin Hall effect. The team plans to test the idea with niobium superconductors, which have especially mobile vortices.

Nonlocal Spin Transport Mediated by a Vortex Liquid in Superconductors 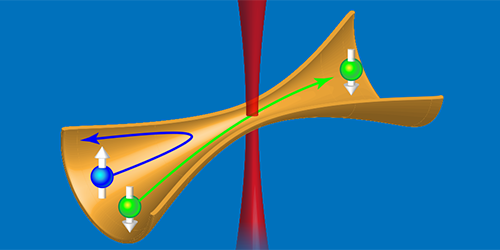 Focus: Filtering Atoms by Their Spin

A spin filter for cold atoms might be used as a testbed for spintronic devices and for searches for Majorana fermions.   Read More »

Nonlocal Spin Transport Mediated by a Vortex Liquid in Superconductors